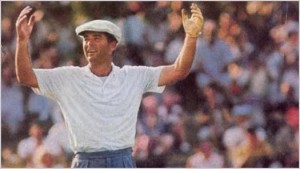 When I interviewed Ken Venturi for a forthcoming feature in Virginia Golfer magazine,  we talked first about his victory at the 1964 U. S. Open at Congressional, the signature performance of his playing career, but Venturi is a natural, irrepressible storyteller, and the interview strayed into his memories of the Masters.  Venturi played some of his his best golf at the Masters, and forged some lasting friendships, notably with Ben Hogan and Gene Sarazen.  He also experienced setbacks that might have crushed any golfer’s spirit.

I am just old enough to have a faint memory of Venturi as a player, but I remember him mostly  as a TV announcer.  For 35 years, Venturi was in the tower for CBS, the voice of the Masters with partners Pat Summerall and Jim Nantz.    Sometimes he stumbled over his own words, struggling to put his thoughts into coherent order — but that was OK.    It was clear that he loved Augusta and had tremendous sympathy for the players.   He conveyed, somehow or other, that he knew exactly how tough it was to perform well at the Masters, and how much every player out there wanted to win.

He did know, of course. Three times — in 1956, 1958, and 1960 — Venturi seemed to have one arm already slipped into the sleeve of a green jacket.  After our conversation, I went back to the record books and to Venturi’s autobiography Getting Up and Down to get some of the details of his Masters experience

1954.   Venturi, a 23-year old amateur and a private in the U. S.Army, was invited to the Masters as a member of the 1953 Walker Cup team.   On the night before the tournament began, Bobby Jones — knowing that Venturi was soon going overseas — asked him to choose a playing partner.  Venturi said, “Hogan.”  He was in awe of Hogan and, later, would wear the the same kind of flat, white cap that Hogan had made his trademark.  During their Masters round, the two men hit it off, and when Hogan made a slighting remark about Venturi’s clubs, Venturi shot back, “What do you expect?  I’m a private in the Army making $72 a month.”  Hogan liked the young man’s spunk, and when Venturi got home, he found a new set of clubs — Ben Hogan clubs — waiting for him.

1956.  Still an amateur, Venturi seemed to have the tournament in his grasp at the end of three rounds.    He took a 4-shot lead in the final round, and proceeded to shoot an 80 — a collapse that is often mentioned in the same breath as Greg Norman’s 1996 meltdown.   As Herbert Warren Wind pointed out, however, Venturi’s performance wasn’t as terrible as it sounds, at least not from tee to green.  On a windy day, Venturi hit 15 of 18 greens.  But he 3-putted six times, twice on the front nine and four times on the back nine.

The loss was bitter, and the headlines following the tournament rubbed salt in the wounds.   When he flew home to San Francisco, Venturi spoke to the reporters who met him at the airport.  The next day, he felt that he was hallucinating when he read the story in the papers.   He was reported as having said that his playing partner, Sam Snead, had given him “the silent treatment,” and that the pairings had been changed because the Masters tournament committee didn’t want an amateur to win.  “I was incensed,” he writes in Getting Up and Down.  “The reporters had gotten the story all wrong, and now I was going to pay the price . . . the account circulated throughout the country, making me come off like a sore, arrogant loser.”

To this day, Venturi is unable to forgive the reporter, Harry Heyward, whom he holds primarily responsible.  And he recognizes the 1956 Masters as the turning point of his career.  “I lost more than a tournament on that April afternoon,” he wrote.  “I lost a future. . . . . [If I had won] I’m  certain that, to honor the title, I would have stayed an amateur forever, and would have been chosen by Jones, as he later told me, to succeed him at The Masters.”

1958.   Venturi came to the 1958 Masters as a successful touring pro.  Leading the money list, he was a pre-tournament favorite, and he was determined to silence once and for all the critics who put him down as a choker.   The final round shaped up as a duel between Venturi and his playing partner, Arnold Palmer.   When they reached the 12th hole, Venturi was one shot back but felt that the momentum was on his side.

What happened at the 12th has been the subject of intense discussion over the years.   The abbreviated version goes like this:  Palmer’s tee shot was embedded, or “half-embedded,” according to the rules official with the group.  Palmer argued, but the official decreed that he was not entitled to a free drop.  Finally, playing the ball, Palmer made a double bogey 5.   Venturi, meanwhile, had pared the hole and was now a shot clear of Palmer.

Palmer, however, insisted on playing another ball.  He took the drop to which he believed he was entitled, and made a 3.   On the par 5 13th, not knowing whether he was leading the tournament or a shot behind, Palmer played an aggressive second shot to the green and made an eagle 3.  Venturi birdied the hole, and — confident that Palmer would be given a 5 at the 12th — assumed that they were now tied for the lead.

On the 14th, word came that the tournament committee had ruled that Palmer was correct at the 12th; his score would go down as a 3.  The galleries erupted when they heard the news.  Venturi was now two shots behind, and his concentration was shattered.  On the 14th, 15th, and 16th, he 3-putted.   Palmer went on to win the first of his four green jackets.

1960.  Once again, Venturi was playing well when he came to Augusta, but Palmer was on a tear, having already posted 4 victories in the new season.   On Sunday, though, Venturi edged into the lead with three birdies on the first six holes (Venturi has a phenomenal record on the front nine at Augusta, the nine that is toughest for most players).   After posting a 70 for a total of 283, Venturi retired to one of the cabins to await the outcome of the tournament.

Palmer was the only man who could catch him.  He parred the 16th when his long putt, seemingly destined to go well past the hole, hit the flagstick and stopped near the hole.  He drained a 35-footer for birdie at the 17th.  He hit his approach at the 18th to six feet, and Venturi stepped outside the cabin, unable to watch on TV.  In a moment, the roar told him what he needed to know.  Palmer had holed the putt and edged him by a stroke.

1983.  Venturi, filling in for Byron Nelson as an honorary starter, recovered some of the old magic as he played the front nine with Gene Sarazen and Sam Snead.   With four birdies and a bogey, he reached the turn at 33.  He wanted to keep playing, and said to Sarazen, “I can lead this tournament.”  They actually started walking toward the 10th tee before Sarazen said, “To hell with it.  You can’t lead anything, Venturi.  Let’s get some lunch.”

1996.  From the CBS broadcast booth, Venturi watched and described the Greg Norman collapse — a broadcast often cited as the finest of his 35 years in the booth.   He was able to describe Norman’s frame of mind as he lost stroke after stroke.  After the round, said to him, “You got into my brain.”  Venturi replied”  “Greg, I’ve been there.”   And when Norman asked CBS producer Frank Chirkinian how he could learn to win again, Chirkinian’s advice was “to ask Venturi.  He’ll tell you how.”

At this year’s Masters, I will be among those who miss Venturi’s voice.  And though he seems to have put  the what-if’s and what-might-have-been’s firmly behind him, I can’t help thinking, when I look over his Masters record, that he could easily have been at Augusta, a man in a green jacket, running the whole show.

For more on Venturi’s memories on the Masters, in his own words, look for the forthcoming interview in Virginia Golfer.  Or read Venturi’s autobiography, Getting Up and Down.