Wanna’ trade a banana for a powerful draw?  If so, here’s the book to help you do it. 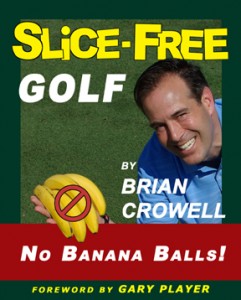 Well, yes, considering each ‘step’ is a series of checkpoints on good golf swing fundamentals, he’s right.  Yet along the way, he does more.  He has some fun with his instructional prose, focuses in on key elements, and adds a myriad of interesting range and ‘backyard’ or indoor practice exercises, which make Slice-Free Golf a good read and golf aid.

Crowell is an NBC sports commentator and PGA Head Professional at Glen Arbor Golf Club in Bedford, N.Y.   In his 20-plus years of teaching, he has seen some recurring themes – the slice being among the most frequent of golf swing ailments.  Hence Slice-Free Golf became his ‘first solo gig’ as an author.

In the book’s introductory pages, Crowell asserts that 82 percent of golfers regularly slice and that its root cause is “a glancing blow of a golf club that results in a ball with side spin.”

So Crowell’s mission is to not only help players eliminate their slice, but to replace it with slight draw, noting that “the average USGA handicap of those who draw the ball is 15 strokes lower than that of those who slice.”  He also says writes that a draw “produces up to 30 percent greater distance than a slice swing using the same amount of effort.   And, “by reading and practicing Slice-Free Golf, those who struggle to drive a ball 200 yards, can pick up an additional 50 yards.”

It’s hard not to be a bit skeptical at first, when you realize Crowell’s ‘Three Steps’ cover the first 70 pages and are focused on good golf swing fundamentals.   Step One, “Get Set,” includes stance, upper and lower body alignment, ball position, squaring your club and the grip.  Step Two, “Swing,” includes a centered turn, swinging ‘under the foam’ and ball impact.  Step Three, “Release,” comprises ‘letting it happen’ and a balanced finish.

But as Crowell said in our interview, he really had to cover the basics to ensure a baseline among his readers.   “The real meat is at impact,” he said. “A lot of students understand the mechanics, yet I felt I had to cover all the bases.  As you may know, you can’t fix just one thing in a person’s swing.

“In addition, as an instructor, you try to eliminate as many variables as possible to help a student achieve consistency,” he added.

Nonetheless, Crowell stresses body position at the moment of impact.  “Look where your chest is facing at impact,” he said.  “Where are your eyes, looking?  I knew if I could help people get square to the target line, the moment of impact would be much improved. “ 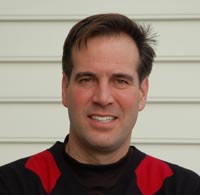 So why the draw?  “The draw is the most powerful shot, no question,” Crowell said.  “The ball is truly being compressed, and it literally takes less effort for more distance.  This allows you to relax and enjoy the game more.  It’s a beautiful thing.”

So will readers be trading in a banana ball for a hook?  So far, that isn’t an issue, Crowell laughed. “It’s important not to exaggerate anything.  We’re talking about a slight right to left.  I have yet to hear someone say, ‘how do I turn this thing off?!’”

Knowing great golfers come from both genders, Crowell doesn’t generally distinguish between men and women in his teaching philosophy.  But recognizing differences in stature and upper body strength, he said, anyone looking to hit the ball farther, will benefit from his book.  “Everyone wants to get the most out of whatever strength they have, and if you’re smaller, you need every ounce of power you can,” he said, citing PGA Legend Gary Player, a friend of Crowell’s who wrote the forward for this book, as an example.  “Gary’s a smaller guy. If you’re lighter or shorter, the shot that will give you the most is the draw.   Delivered from the inside, it’s a square shot that will put all of your energy into the ball.”

Crowell’s 26 “Slice-Free Golf Drills” are where the fun comes in.  Designed for range, backyard or high-ceiling indoors practice, he puts his humor and personality into each.   Want to slow down and square up your downswing?  Go pigeon-toed.  ‘Spaghetti’ arms can help you check your address position.  A rolled-up towel ‘foot wedge’ can encourage a more centered swing in practice.

Crowell also will have you employing walls, shadows, a mirror, chair, plastic bottle, tubes, flashlight cardboard box, duffel bag, headband and ‘head cover deodorant’ in various drills.  If nothing more, your practice time will be a lot more fun, more engaging, and as a result, more productive.

Key in all of the practice drills is to establish your target, however.  “All require some sort of alignment,” he said.  “You need to envision a target to know where your body aligns. And while you can’t take most of the drills on the course, you will learn in practice how they feel, which is a very valuable sensation.”

While his book will help golfer drop strokes, Crowell’s ultimate goal is to help golfers have more fun. “My whole thrust is that golf needs to be more fun,” he said.  “People don’t have the time or resources to waste in a sport that isn’t fun for them.   I want them to continue to have fun, and if they are frustrated, they need to know they can get better.”

Slice-Free Golf is available in several electronic book formats and two print editions:  a B&W paperback for $14.95 and full-color version for $24.95.  It can be ordered at www.slicefreegolf.com