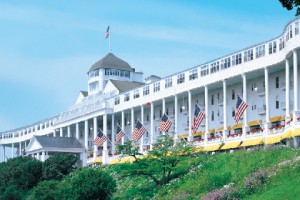 Except for a short stint out of state, I’ve lived in Michigan all of my life. And while I’ve visited Mackinac Island a couple of times and biked its perimeter, inhaling every inch of its beautiful shoreline, it has taken me more than 40 years – too many years – to visit its most visible historic landmark – the Grand Hotel.

Perched on a dramatic low bluff with expansive views of Lake Huron and the straits that connect it to Lake Michigan, the Grand Hotel, built in 1887, is on the U.S. National Register of Historic Places and is a designated National Historic Landmark. It is one of the country’s few examples of massive wood construction. With its towering white columns and world’s largest, 660-foot porch, it’s identifiable worldwide. 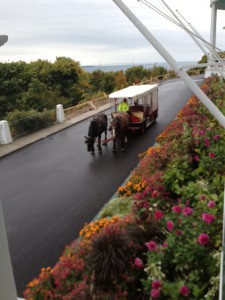 From the porch of the Grand Hotel

The weather during our early October visit was probably as bad as it gets in season – heavy rain, cool temps and a brisk wind. The huge Esther Williams pool already was drained and closed, and no bocce or lawn croquet was underway on the huge garden lawn. But when at the Grand Hotel, there’s a lot of room to roam and plenty to enjoy inside.

Except for the contemporary interiors of the lobby level shops, which offer flowers, ice cream, sundries, books, art, coffee and treats, most of the hotel is classic, old elegance in abundance. The parlor-level provides access to the porch and hosts a huge ornate parlor with many seating clusters and the hotel’s huge Main Dining Room. The wood-paneled library-style Audubon Lounge is toward the back, along with a raised and mirrored seating area that opens to a large private Asian-themed meeting/dining room. A harpist provides background music for daily afternoon teas, while evening receptions and dinner typically feature other music, like the two swing-trios that played when we were there. 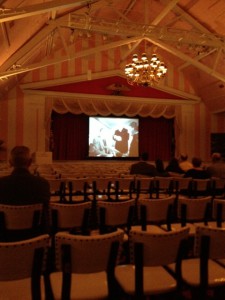 There’s a barn-style, exposed-rafters indoor theater, that offers free snacks and old-fashioned bottled sodas when a movie is being shown, and the two-story Cupola bar is a walk-up crow’s-nest style bar that has a 270-degree view of the area from high above the hotel’s main entrance. There, Grand Manhattans and Big Porch Ale, by Michigan’s Bell’s Brewery, are among the featured drinks.

In addition to the broad staircases, ultra-wide hallways of the third and fourth floors and 12-foot-plus ceilings throughout, the food is equally ‘big’ at the Grand. Dinner is a formal affair with suited waiters and crisply uniformed hostesses, many of which come from Jamaica to work for the summer. Also, after 6 p.m., women must wear nice slacks, dresses or skirts as part of their public attire, while men are required to don coats and ties. 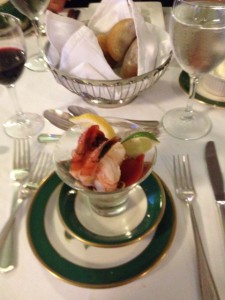 Dinner features a rotating limited menu with several options from which to choose among appetizers, soups, salad, entrees and desserts. I chose the Gulf Shrimp Martini – three big shrimp atop a nest of spaghetti noodles and cocktail sauce, topped with a tomato-red ball of pickled squid (Glad I got my readers out for a closer look, and subsequent pass!). The roasted butternut-ginger bisque was creamy and tasty, the Caprese salad was fresh with flavorful ripe tomatoes, and our entrees – beef bourguignon and maple barbecue glazed salmon – were satisfying, well prepared and beautifully presented. The signature Grand Pecan Ball of rich vanilla ice cream, coated in pecans and resting in a pool of fudge sauce, was yummy, and the coffee was deliciously strong. 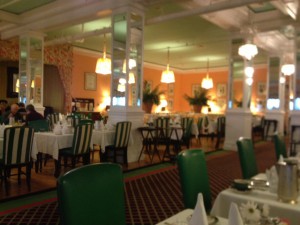 One typical comment I’d heard in the past was despite all the grandiose surroundings of the Grand, many of its 385 guest rooms were said to be somewhat small. Our room was average size, it was relatively narrow, but pleasant, with its high ceilings and nautical-themed lighthouse wallpaper, painted white furniture, white chenille bedspreads and soft green and white comforters folded across the feet of the beds. The two easy chairs looked rather worn and tired, and we had no view whatsoever. We looked directly onto one side of the hotel and our angled view was of the roofs of the hotels service areas.  While well appointed it wasn’t perfect – our mini-bar never opened, even though we switched keys twice at the front desk, and the walls were a bit thin, as we could hear muffled tones of our neighbors talking.  We decided we didn’t mind our sub-par vista – too much – until we caught a glimpse of the spectacular view of the deep blue waters of the Lake Huron through guest rooms across the hall. Oh, well. Nonetheless, the beds were very comfortable, the room was cheerfully bright and clean and we loved the high ceilings. 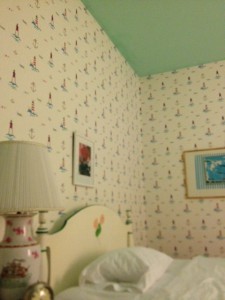 Our Room at the Grand Hotel

We apparently spent our night in a common ‘Category I’ room, but the hotel offers two upgraded categories: Category II’s, which have larger interior or smaller lake view rooms; and Category III’s which have lake views, including some with balconies. In addition, the hotel boasts more than 36 exquisitely designed ‘named’ suites or rooms. There are seven suites named for former First Ladies – Jacqueline Kennedy, Lady Bird Johnson, Rosalyn Carter, Nancy Reagan, Betty Ford,Barbara Bush and Laura Bush; suites that recognize historical and/or design elegance – the Napolean, the Josephine, the Vanderbilt, the Victorian, the Commodore, the Wicker; those that recognize political stature, The Govenor’s and Presidential Suites and those named for past presidents and Michigan governors – the Eisenhower, Jefferson, Milliken, Lincoln, Teddy (Roosevelt’s) cottage. There are also suites with Hollywood connections – the “Somewhere in Time,” Jane Seymour and Esther Williams suites, all which recall movies filmed at the Grand. 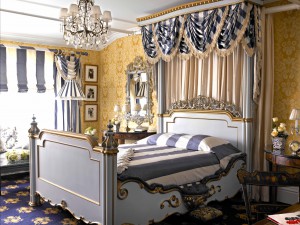 Although the brevity of our stay, combined with our blustery, rainy weather, prohibited us from playing The Jewel golf course, it looks delightful. Its Grand nine is located across the street from the hotel, with views of Lake Huron and Round Island, while The Woods nine is set in the island’s interior, offering views of the Mackinac Bridge and the Upper Peninsula. At the turn, you and your clubs are transported via horse-drawn carriage a mile and a half from the Grand to the Woods nine…How’s that for a unique 18-hole experience?!

Built in 1901, the Jewel’s Grand nine was redesigned in 1987 by Jerry Matthews, who also designed the Woods nine, which was added in 1994. The Jewel is open to the public, as well as hotel guests, offering rental clubs, golf carts and pull carts for walkers. 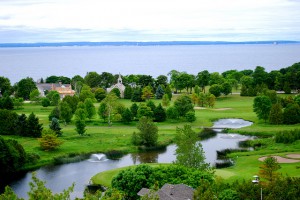 Booking a room at the Grand Hotel’s advertised rates is a bit understated. That’s because, as the fine print and reservationists will tell you, there’s a $7.50 per person baggage handling fee, 2 percent local and 6 percent state taxes and a 19.5 percent service fee, which all will add a healthy margin to your costs. The plus side, however, is that there is no tipping allowed at the Grand Hotel, and the per person rates typically reflect the hotel’s Full American Plan, which includes the Grand Buffet lunch, an exquisite five-course dinner and a full breakfast menu, including a buffet option, or some package variations. When we booked as part of a Celebrate Michigan package, free golf at The Jewel was included (golf cart fees additional) as was free admission to Fort Mackinac and Mackinac Art Museum; a pre-dinner reception with an open beer/wine bar and fruit and cheese hors d’oeuvres; and after-dinner demitasse coffee. Even though our fees added almost $100 to our total rate, our stay was still well worth the cost.

Rates vary substantially, depending on room choice and seasonality, but, as of this year’s schedule, children under age 12 are free, those 12-17 cost $59 per night, while those 18 and over are $139 per night. Children’s rates include the same meal plan as accompanying adult, and complimentary children’s programs also are available.

Access to Mackinac Island is by ferries from Mackinaw City, at the tip of the Lower Peninsula, or from St. Ignace, in Michigan’s Upper Peninsula, or via small planes. Once there, all transport is by horse, horse-drawn carriage or bicycles. 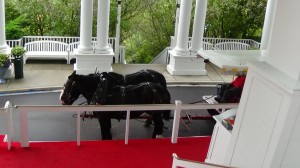 All automotive vehicles are prohibited, except for the golf carts on the island’s two golf courses, Wawashkamo Golf Club and The Jewel, and a few emergency and state park maintenance vehicles. Only in the heart of winter are snowmobiles allowed for recreation, transportation and crossing the “ice bridge” to the mainland.

The Grand Hotel and most island business are open only from May through the end of October, after which only a handful of businesses remain open to service a small number of visitors and the island’s 600 year-round residents.