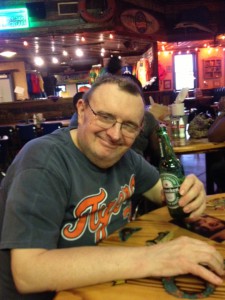 On May 16, my older brother, Edward, or Eddie, as he prefers to be called, had the first of two brain surgeries.

Eddie is my disabled brother. Now, 65, he fell out of a tree and suffered a concussion at 12. Grades went from all As to Bs and Cs, but back then, I think it was just called ‘adolescence.’ No one questioned the head injury. In 8th grade, he ran into a parked station wagon while going for a pass in street football and broke his jaw. While it was wired shut, we all learned what smoothies were, long before they were trendy…although his were made of veggies, meats, potatoes and yes, for dessert, some fruits.

During the Vietnam War, Eddie enlisted in the U.S. Air Force, rather than just await his draft number’s arrival. After basic training, he spent some time at Edwards Air Force Base in Bakersfield, Calif., then was assigned to a base on Mt. Hebo in Oregon. There, he was a passenger in a Jeep that rolled on the beach. Concussion #2.

His overseas assignment was in South Korea. He met a woman there, Miss Hong, and became engaged. One day, exiting a bus quickly, he slammed his head due to the low clearance. Concussion #3. Engagement called off.

When Eddie completed his four-year commitment and was honorably discharged, he returned home and attended Macomb Community College to work on his associate’s degree and almost obtained it, but for some reason quit, shy of completion by just a few credits. By now, he was realizing some short-term memory loss and typical characteristics of those who experience closed head injuries. He became a blue-collar worker, part of the team in the auto shop of Montgomery Ward for many years, and as his memory worsened, taking a job at Bob Evans Restaurant busing tables…and well, changing the marquee sign apparently, as one day, out on a ladder, by himself, with no spotter, the ladder fell backwards, and Eddie broke his back. From days in a Stryker frame to rehab and home, he eventually – and amazingly – recovered.

Earlier this year, my mom and sister ,Kathy, noticed that Eddie, a career bachelor and occasional golfer, was having some physical problems, deteriorating memory issues and maybe even had experienced a minor seizure at a family dinner, where he, in essence, blanked out momentarily. Kathy began to investigate his issues with VA and private hospital physicians, eventually landing in a neurosurgeon’s office, who diagnosed his condition as stable, but significant, hydrocephalus, with a billowy arachnoid cyst in the center of his brain – an unusual condition, that may likely started in childhood. Surgery was recommended.

The May 16th brain surgery involved removing a piece of Eddie’s skull and inserting an instrument to drain the cyst and surrounding fluid. Mission accomplished, with some side-effect bleeding which limited the procedure. A week later, insertion of a permanent shunt was recommended, and a second surgery was performed around Memorial Day.

Eddie’s recovery was worse than his surgeries. There was salt-wasting, which upset critical electrolyte balances, and worries. There was a loss of mobility and motor skills. Some days were good; some days were bad. Eddie stayed in Intensive Care for nearly 3 weeks, regular hospital care for nearly a week, acute rehab for three weeks, regular rehab for another 3 weeks or so and finally came home July 30, with in-home rehab and physical therapy continuing.

For a person who has been blessed with excellent health, my unexpected immersion in hospitals and the health care world was eye-opener. I came to understand the other reality that is the norm for those with serious health issues. The wheelchairs, the hushed conferences, the waiting rooms, the I-Vs, the beeping monitors, catheters, bed pans, hospital socks and gowns, absorbent underwear, electronic beds, call buttons and covered food on trays. There are the sitters, the kind and competent nurses and aides, the on-call and attending doctors, YOUR doctor and the long-term patients’ omnipresent desire for a ‘get out of jail free’ card.

It was rough summer for everyone – especially Eddie, who is just now, seeming to be finally back to his pre-surgical baseline. Whether all of the efforts of those involved in his surgeries and care will result in a better quality of life for Eddie, has yet to be determined. But he’s home now, and was able to celebrate his 65th birthday with a beer, a seafood dinner and hearty ‘Happy Birthday’ song from family and a full house of diners at a nearby Joe’s Crab Shack.

So I’m ready to get back to normal, too, writing about all the things I like best – yet never forgetting the hundreds of thousands of people experiencing life-altering illnesses, injuries and for most, hopefully paths to recovery, everyday. Bless the caregivers who take on the burdens and come back with a smile to do it all again the next day, and the patients, who like, Eddie, demonstrate what trust, resilience, faith, hope, determination and gratitude are all about.