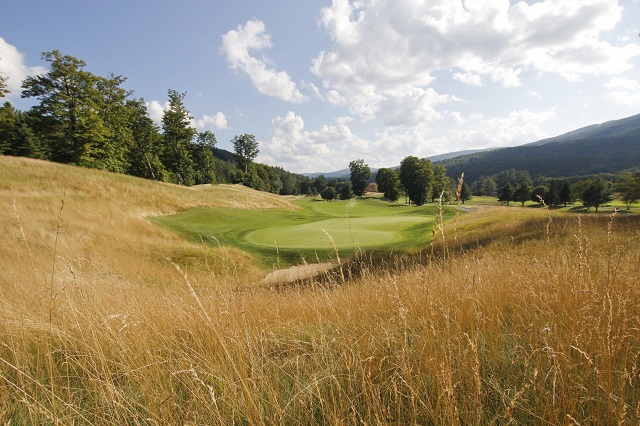 It’s 19 degrees outside, the fields are covered in white, my steps are coated with ice. So naturally, here in early January*, I’m thinking about spring in Vermont. In late March I’ll be on the near-edge of cabin fever, tired of putting on the living room rug, and itching from my woolen socks and the urge to get back out on a golf course.

A shortened golf season is the price one pays to live in Vermont, but I happen to think it’s worth it, enamored as I am with the other charms of the state. So I’m sitting here by the blazing wood stove, writing this in relative equanimity, even though my last round in my adopted state was in mid-November.

In good years we’ll play into December. It all depends on the snow which, once it arrives, usually doesn’t depart until spring. If it’s been a mild winter we might be working the rust out of our swings by late March, more likely April, though most of the mountain courses won’t open until May.

So there’s a lot of golf to cram into the summer months, and there may be nothing better than playing here among the flaming colors of autumn. Vermont is aptly called the Green Mountain State. When even the interstates are scenic routes, it’s not a surprise that tourism rivals dairy farming as the major cog of the economic engine. 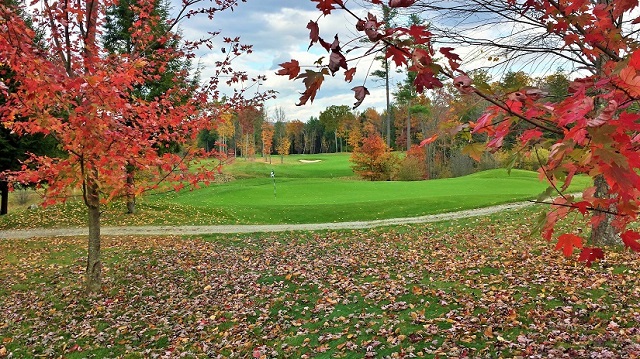 If it’s true that Ethan Allen and his Green Mountain Boys originally banded together to drive New York settlers out of Vermont, all was forgiven after the Revolutionary War, and visitors from New York, Oklahoma or anywhere else are welcome back, particularly on the 70-plus local fairways, most of them public.

That may not sound like many, but remember that Vermont is not a huge state—slightly more than 600,000 souls call it home, meaning our two senators in the U.S. Congress outnumber the lone congressman. Traversing the state at the southern end can take less than 45 minutes, provided you don’t get stuck behind a truck going uphill.

A foot to head trek (or vice versa) is doable in about two and a half to three hours, unless you do what I did one year—play one hole at every course along Route 100, which begins at the southern border and runs out of asphalt just a few miles short of Canada. Those 18 holes took me and the two other innocents I had coerced to come along about 15 hours. (And included an extra hole at a miniature golf course.)

But wherever you enter the state you’re never too far away from the next good golf course, a good golf school, or a good glass of beer (Vermont has more breweries per capita than any other state). For those pondering a visit, here are just a few south to north recommendations:

The southern border is about a three to four hours drive from Manhattan, a little over two from Boston. The Brattleboro Country Club is a lively curtain-raiser in the equally lively town of Brattleboro, a brisk introduction to the rolling elevation and expansive views found throughout a state where an uneven stance is more the rule than the exception. 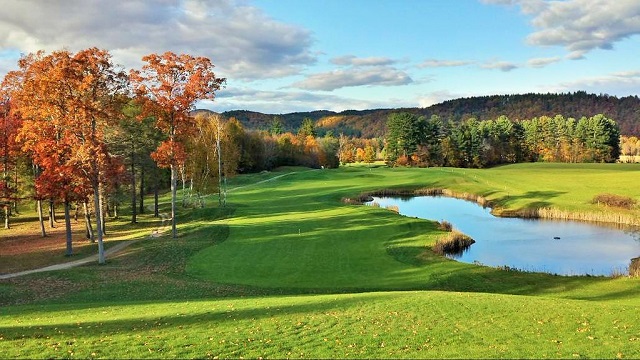 The BCC began as a nine-holer in 1916, redone by Donald Ross contemporary Wayne Stiles in 1930, and expanded to 18 in 2000 with new holes blended in by native son Steve Durkee. The differences in design were distinct in 2000, but if now more seamlessly blended there’s still a nice yin yang of contemporary and classic holes at Brattleboro, and the state couldn’t present a better opening act.

Unless one travels slightly northwest to one of Vermont’s more picture perfect New England towns, Manchester Village. The Marsh Tavern there has welcomed visitors since 1769, and now the Tavern is a dining area at The Equinox Golf Resort & Spa, a lovely high-end resort. (Fully entitled to its slogan, “Serving the Republic since before there was a Republic.”) One can indulge in a plethora of activities here—a Green Mountain Falconry School, an Orvis Fly Fishing or Shooting School, a Land Rover Driving Experience—when not driving the fairways of the Golf Club at Equinox.

The Golf Club at Equinox

This 1927 Walter Travis design, buffed up by Rees Jones, could hardly be in a prettier setting amongst the surrounding hills with a view of the steepled village. Travis also designed the adjacent but private Ekwanok Country Club (check your reciprocals!) where Robert Todd Lincoln, the only son of the President to survive into adulthood, served as club president.

Oddly enough, the Equinox course was the famed player’s last design, while Ekwanok was his first, making Manchester the alpha and omega of his design career. (And for that matter his final resting place–in Dellwood Cemetery, just down the road from both courses.)

With a few samples under one’s golf belt, it’s time to go whole hog ski mountain golf at the 27 holes of the Stratton Mountain Country Club, designed by the late Geoffrey Cornish, who was the dean of New England golf architects, working into his 90s. 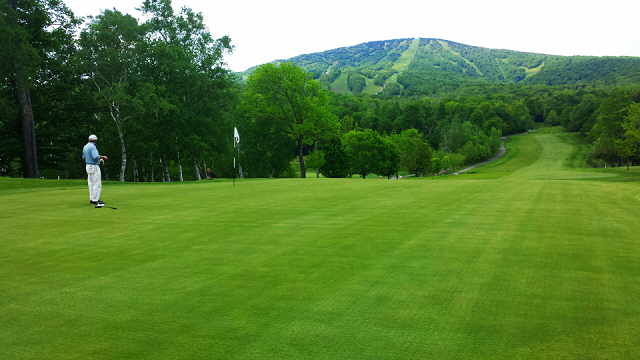 There are three playing combinations here with the separate nines—the Mountain, Lake and Forest tracks—though playing all three was the way I tackled it last season. I’d certainly recommend penciling in the Mountain route because it would unfortunate to miss the par-5 fifth. From the blues tees it’s 621 yards, one of if not the longest hole in the state, and it’s all downhill, almost a freefall from the tee. It’s not vertiginous, only thrilling. But there are still a couple of streams to cross and ample bunkering by the green to negotiate, so it’s a tough one.

Like other Vermont ski mountain/golf course resorts, Stratton has a full-fledged golf school that might make for a good reason to plan a trip here in the first place. Students end each day on the course, though in the evening it might be worth a visit to the appropriately-named Mulligans at Stratton Village for a brew and a bite. 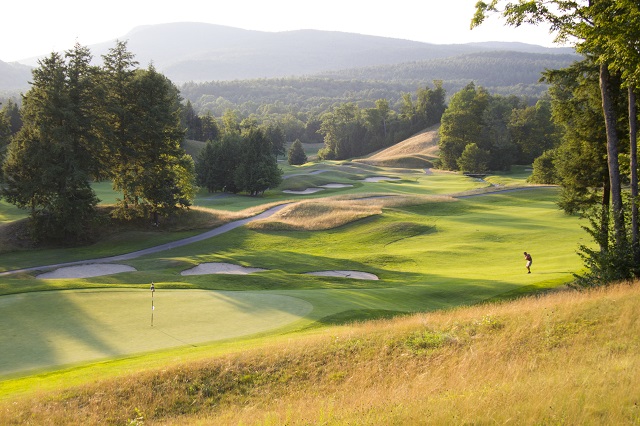 Some of the best par-3s in the state can be found a little further north at the Okemo Valley Golf Club, part of the Okemo Mountain Resort, and another Steve Durkee design. Durkee took full advantage of the rolling hills in creating an expansive heathland-style course. The scenery is always splendid here, but the autumn views in the mountains are downright stunning, particularly on the downhill par-3 eighth, another sheer drop from tee to green.

The course has some player-friendly bounces and funneling fairways, particularly on the second nine. But then comes seventeen, a real beauty and beast nestled at the base of the mountain in a picture postcard wetlands setting. Nice, until you realize you have a 190-yard plus carry over the lily pond. Even if you don’t rinse one there’s still work to do on a green that is long, narrow and wildly sloped. 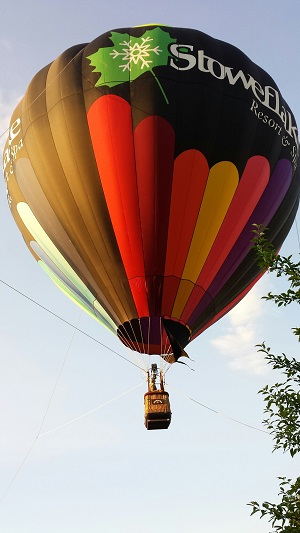 Up in the air with the Stoweflake Resort balloon

Visitors to Vermont nearing Waterbury are virtually required to stop at the Ben & Jerry’s factory for a tour and some ice cream. It stops just short of a law, but if you’re in Waterbury you’re also just down the road from Stowe, and the brewery and visitors center of The Alchemist.

That means you, too, can get on line and try to score some Heady Topper, the double IPA that was ranked the best beer in the world for several years running. Bring some home and you have some heavy trading cachet with your craft beer drinking buddies.

To make life easier, stay virtually on the same site as the brewery at the Stoweflake Mountain Resort and Spa, which has its own nine-hole par-3 course, and is next door to the player-friendly Stowe Country Club. Even better, the resort has a corporate membership to the otherwise private Country Club of Vermont.

Whether one would wind up playing it with the owner of Stoweflake, Chuck Baraw and his wife, Amy, as I was lucky to a couple of seasons ago, is open to question. But the chance to play what is unquestionably one of the best courses in the state is not to be taken lightly.

Nor is the layout by Canadian designer (and amateur great) Graham Cooke, who has fashioned a beautiful course in a breath-taking setting in Waterbury. A wide-open links-style front nine heads into the woods for much of the return trip, though it returns to open and expansive finishing holes on an always immaculate track. 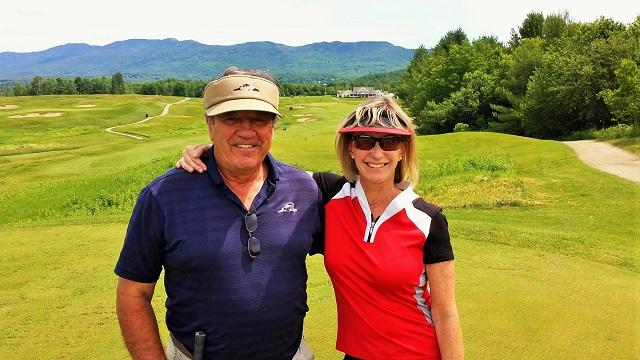 Stowe has embarrassment of golf riches (and beer, since the von Trapp Brewing Bierhall and Restaurant is also nearby, serving up its excellent lagers). But you’ll have to book a room at the Stowe Mountain Lodge, a luxury aerie nestled near Mt. Mansfield, the state’s highest peak, to gain access to the otherwise private Stowe Mountain Club Golf Course. The course naturally has eye-popping views of Mt. Mansfield and Spruce Peak, but it also means the track is a wild mountain ride.

Designed by the late Bob Cupp, the course opened in 2007 and immediately impressed as a masterpiece of concision, jamming a 132 slope-rated course into a mere 6,041 yards. The tips only stretch the course to 6,411 yards but those unbalanced enough to attempt it will face a slope rating of 141. In either case, the gauntlet is down, the views are great, and the post-round beer is bound to be a winner. 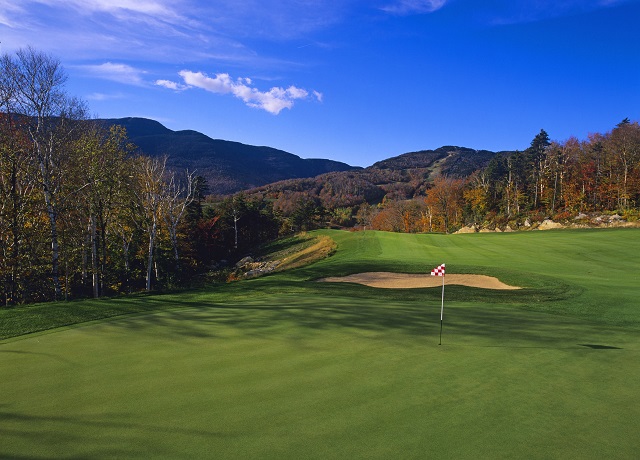 Jay Peak is about as far north as one can go in Vermont before showing your passport. The four-season resort (with a year-round indoor waterpark) includes the Jay Peak Golf Course, which fully opened ten years ago, the second Vermont design by Graham Cooke and since lauded almost as highly as the Country Club of Vermont. Actually, as far as public golf in the state goes, the Jay Peak course has topped the annual Golfweek lists for five of the last six years.

Cooke brought a similar touch to the woods and slopes of Jay Peak, though I confess I have to take all this on faith, since this is the highest-profile Vermont course I have yet to play. I plan to tamp down the wood stove and rectify this next summer, so maybe we’ll meet out on the course. As long as you give me some strokes.

*A version of this piece first appeared in the 2017 Directory & Travel Issue of Golf Oklahoma.

Related posts:
My Vermont Beer Vision Quest
His Name Was McNamara, the Leader of the Band
The Uphill Path of Wayne Stiles
The Best Golf Advice I’ve Ever Received