[The Session is a monthly effort where beer writers around the interwebs respond to a topic question each first Friday. This is the 106th installment, so it’s been going on for quite a while. The links to this month’s responses can be accessed at the website of one of the founders of the feast, so to speak, Jay R. Brooks. At his Brookston Beer Bulletin he asked participants to “to write about whatever made you happy, so long as it involved holiday beers….” No problem.]

For the last three years I’ve taken on the agreeable task of writing about a dozen holiday beers or winter warmers, one a day (or late into the night). The 12 Beers of Christmas are reviews after a fashion, namely, my fashion, meaning they’re less slavish tasting notes and more a virtual real time beer diary of what I’ve managed to come up with for the particular season, and where and with whom I might be drinking them.

And despite the sheer craziness of the idea in terms of the time it takes me, it looks like I’m going to do it again. Despite the minor anxiety and sleep deprivation it creates, it’s just too much dang fun. It’s fun to find the beers, it’s usually a great deal of fun to drink them, and then it’s sort of fun to try and wrap up a cogent piece before I pass out from exhaustion. The series could be used as a buying guide. Mostly I hope the pieces are just fun for others to read. So please stop on by again in the days ahead.

Here’s a reprise of the 12 Beers of Christmas 2014, with links to each of the 36 beers I’ve written about in the last three years, so you’ll get the idea.

I have only a few rules. Other than Anchor’s Our Special Ale, which always leads off, I won’t repeat a beer. I give Anchor a bye because the recipe theoretically changes every year, and because the company pretty much single-handedly revived the holiday brewing tradition, in the U.S. at any rate, in 1975. I wouldn’t dream of going through the holidays without it.

Sierra Nevada’s Celebration Ale always deserves a nod for being an early player (since 1981) and making an indispensably great beer, but that recipe does not change. Nor does that of Jubelale by Deschutes Brewing, which has been at since 1988 when the brewery was founded. As I noted when I included it last year, the Jubelale was actually the first beer the brewery ever bottled.

I’m happily emptying a bottle tonight by way of warming up for the big push, and to me it’s an exemplar of what a holiday ale can be—bold, bright, warming, and just downright delicious. A beer that seems like a gift from the brewers. Actually, in this case, the beer is literally a gift from the brewers, since Deschutes is still not distributed in Vermont. So I was mighty happy to see it again show up at my door this year.

I do request a few beers from brewers, mainly in hopes of some geographic diversity. But mostly I just grab what I find on the shelves at my local shops. That can be an iffy thing in southern Vermont, but we get by.

I have no other rules. I’ve slightly moved the beginning and end goalposts each year, and this year I’m toying with the idea of not doing a post for 12 consecutive days, since at the end I wind up as wasted as Santa Claus on December 26th. But we’ll see. 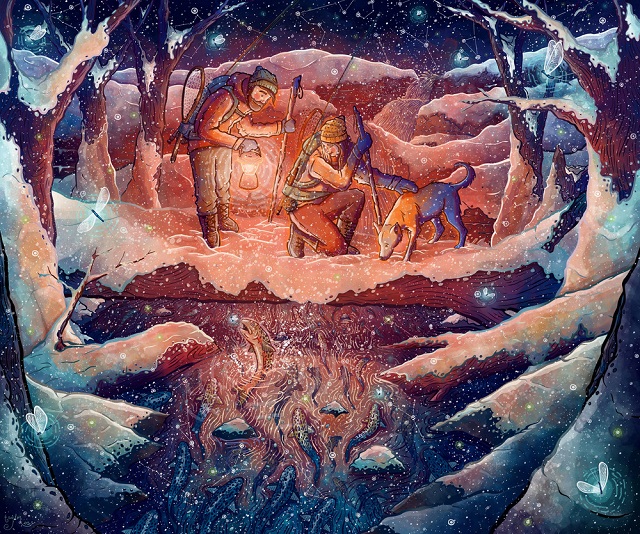 Deschutes, like Anchor, changes things up every year in terms of the label. With Anchor it’s always a tree. Since 1995 Deschutes has chosen different local artists to create something “festive and wintry” and gives them pretty free rein after that.

This year’s artist, illustrator and designer Taylor Rose, calls her piece First Tracks First Cast. She says it, “…was inspired from many fly fishing adventures here in Oregon. It was created using pencil, pen and ink, and digital mediums.”

If Rose still lived in her native New Hampshire she wouldn’t be able to find any Deschutes, either. But she now lives in Bend, Oregon, hometown of the Deschutes Brewery. So she didn’t have to go far for this beer: 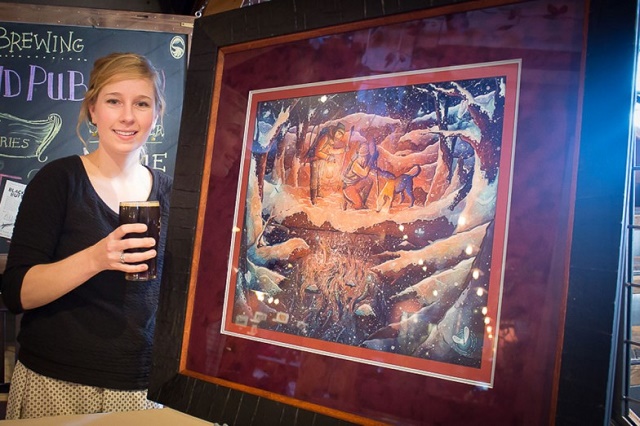 Well, cheers to her, and to all. Let’s enjoy all the holiday beers to come, and hope they assist in keeping the season as merry and bright as possible.