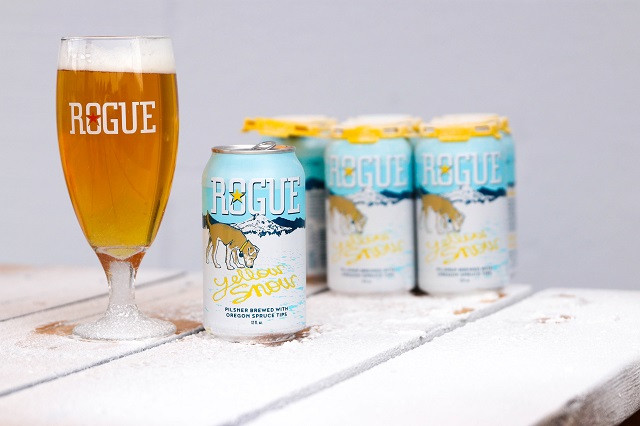 True, more of a winter seasonal than a rip-snorting holiday beer, and one that has undergone the beer equivalent of a sex-change operation: Yellow Snow debuted in 2002, created for the Winter Olympics in Salt Lake City. But then it was an IPA, and that’s what it has been ever since. Until this year.

Rogue President Brett Joyce said, “This year we decided to make a beer reminiscent of our Pacific Northwest winters.” Well, it’s not like Rogue is hurting for IPAs—seven of its 12 year-round beers are IPAs, including the 4 Hop through 8 Hop series.

Rogue, a west coast institution since 1988, is headquartered in Newport, Oregon, but with outlets in Portland, Washington state and San Francisco. In March the Brewers Association ranked it at 30 among the top 50 craft brewers in the U.S., based on beer sales volume, and the third largest in Oregon behind Deschutes and Full Sail.

Some of Rogue’s beers are available nationwide. It’s probably best known for Dead Guy Ale. I’ve always been fond of its Shakespeare Oatmeal Stout, and in an older piece gave a holiday recommendation to Santa’s Private Reserve, a bottled beer with a glow in the dark label. (Shouldn’t every beer have a glow in the dark label, for those times when you’re stumbling in the dark looking for another little drinkee?)

It can’t be said there’s no sense of humor at work at Rogue, and surely Yellow Snow is a brilliant name for a winter beer. When else, after all, can one see the stuff?

Now, I’ve been known to occasionally water an area around our house, when the need arises and I’m not inside. The area known, in other words, as outside. While a year-round endeavor, one has to admit there is greater pleasure in the act with snow on the ground. I see what Joyce is getting at.

The old joke also comes to mind, one revived with each new administration, in which the President calls for an investigation when he sees some yellow snow in front of the White House, in cursive, saying “Trump sucks!” Not that Trump would necessarily trust the FBI with the task, but in the joke the FBI returns with the news that the urine was tested and was unmistakably the Vice-President’s.

“I can’t believe Mike Pence would write that in the snow,” says Trump.

“Well, he didn’t,” the FBI investigator says. “We had the hand-writing analyzed, too, and that’s unquestionably Melania’s.”

I don’t know if a hectoring Vermont mom first came up with the don’t-eat-the-yellow-snow warning, but it’s possible, by way of distinguishing it from other toppings. Sugar-on-snow is big at Vermont winter festivals, like cotton candy in summer. People lap up various sugary liquids—albeit mostly maple syrup—poured directly onto snow. (Or shaved ice, if the chamber of commerce is fussy.)

I suppose it’s possible that those from warmer climes have never actually heard the phrase in situ, and believe it’s something Frank Zappa cooked up. “Watch out where the huskies go, and don’t you eat that yellow snow,” the chorus chants at one point in the Zappa song. Well, we threw in a few bars of “Santa Lucia” yesterday, so let’s be fair:

Offering a Pilsner as a winter seasonal is decidedly heading down a different path, a path strewn with strong, malty and frequently spiced ales. Here we have a 5.5% ABV lager, almost as bold a step as Victory Brewing’s Winter Cheers, a wheat beer.

The beer itself is not that bold, although Rogue tries to spice it up with the addition of the spruce tips. I have to confess, I detected not the slightest trace of any spruce whatsoever. My bad. It does seem a little odd that I’d discern no spruce in a beer that has some, but would discern some in a beer (Anchor’s Christmas Ale) that has none. But so it goes.

Slightly hazy in the glass, the beer has a riotous meringue head, a sweet, perfumed honey nose with pils character, despite the use of Perle and Sterling rather than Saaz hops. The flavor has a touch of honey, is a bit sweeter than I might like, but it resolves into a suitably crisp mouthfeel with a surprisingly dry finish. 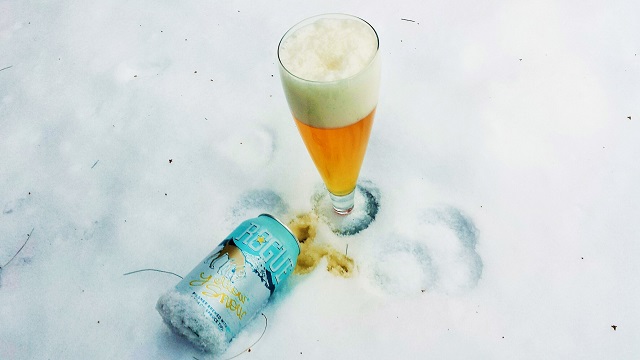 It’s a perfectly fine beer, it just doesn’t light up my Christmas tree. But if you’re weary of strong, malty and frequently spiced ales and in the mood for a lager, do drink the Yellow Snow. If you don’t like it (or maybe even if you do), pour a little in the snow, warn your friends not to eat it, and then tell them the Trump joke.