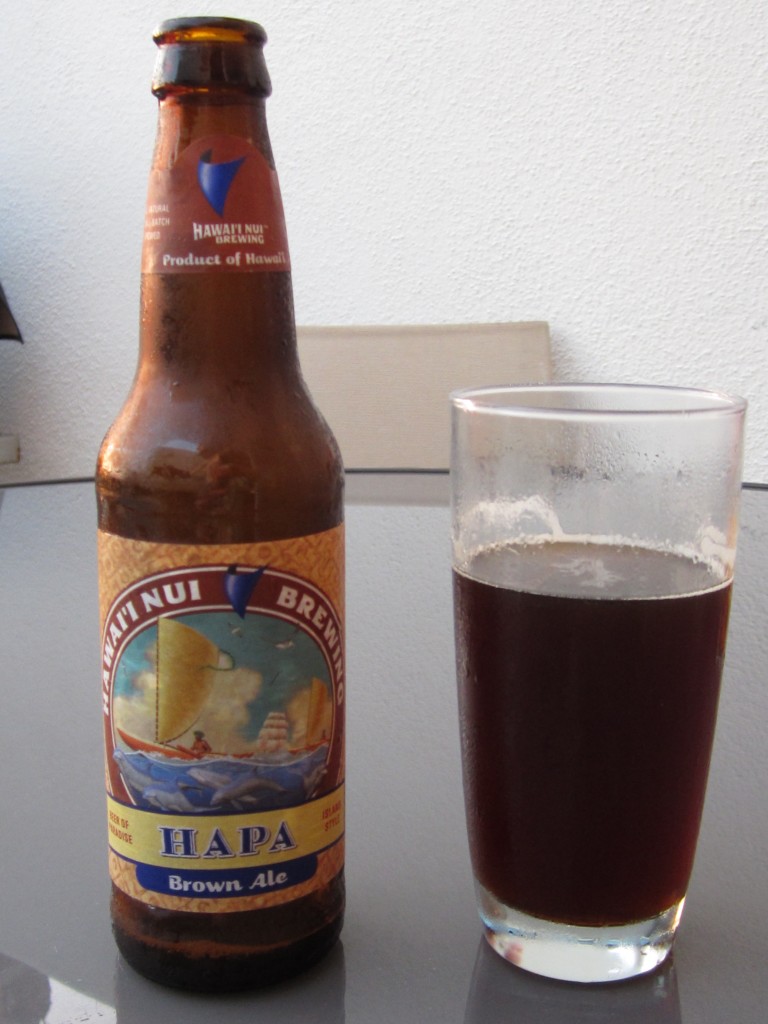 We’ll take a brief break from the Maui Brewing Company beers, since Charles Head, general manager of the Fairmont Kea Lani, managed to unearth something completely different for our pau hana time.

The term refers to that period after work when one relaxes, and it’s almost onomatopoeic, isn’t it? My work of the day had consisted of playing 36 at the Wailea Golf Course, so clearly I needed some pau hana time.

So in the early evening we wandered from the main building at the Fairmont down toward the beach, past the evening yoga practitioners, and into one of the 37 two-and three-bedroom luxury villas that are part of the property, obviously ideal for families or golf groups. (The main hotel includes 413 one-bedroom suites.)

We sat out on the villa’s veranda enjoying the start of another in a regular series of stunning Hawaiian sunsets, as Charles elucidated some of the Fairmont’s qualities since opening in 1991 and undergoing a $28 million revitalization over the last three years.

Enjoying an enviable 80% occupancy rate, the resort does have a relative bargain period in September, when more couples arrive and golfers might look to book some group trips.

Activity abounds at any time, including the outrigger experience we were to attempt the next morning, and depicted in serendipitous fashion on the label of the Hapa Brown Ale bottles I was successfully attempting to empty.

Hapa literally means “half,” and generally refers to the mixed blood inhabitants of the islands, which outnumber native Hawaiians (said to make up under ten percent of the population), but in any case result in what the Urban Dictionary defines as: “Damn good-looking people.”

Hawai’i Nui suggests the Hapa Brown is a blend of beers to create a unique brew, in this case a strong and pretty good-looking American Brown Ale clocking in at 6.4% ABV.

If the races on Hawaii are an intriguing blend, the history of the Hawai’i Nui company is a complex and currently murky one, the brewery begun in 2007 by former Kona Brewing employees. It later merged with the Mehana Brewing Co. and was, pretty much as I was draining a glass, embroiled in bankruptcy proceedings. 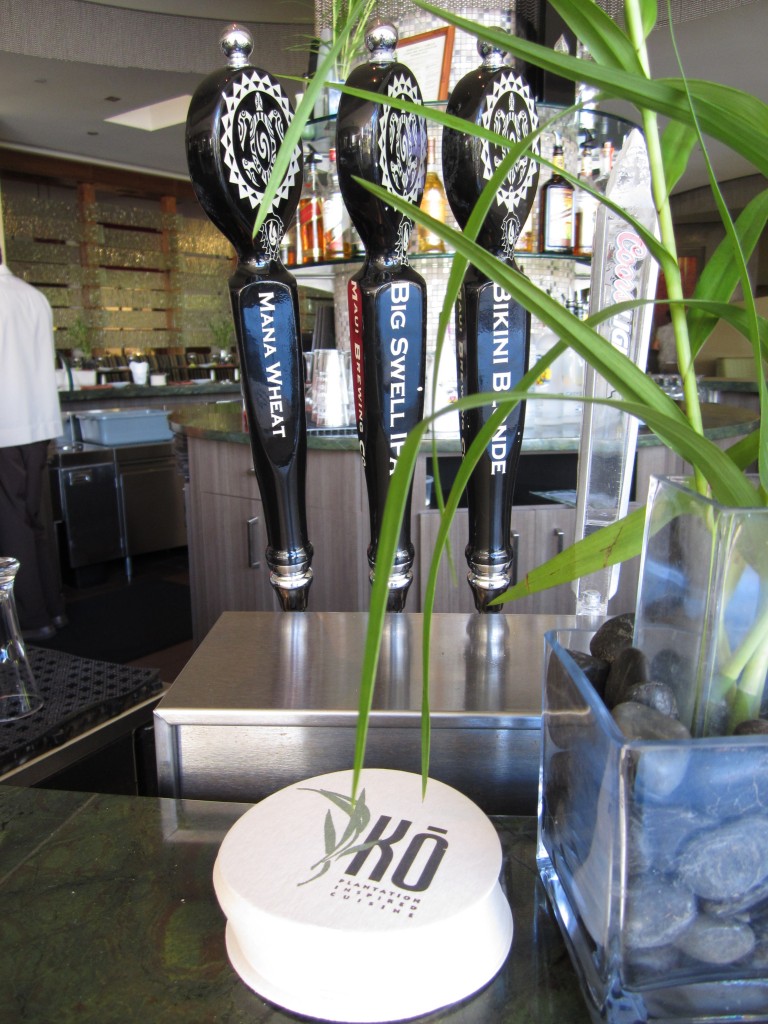 nce the beer is quite good. It’s a dark, rich, sweet and tangy brown with some roasted notes and a hint of tangerine from the Amarillo hops, certainly more to be sipped than gulped. One can only hope it survives the legal imbroglio and escapes the endangered list.

Regardless of our heritage, we felt like damn good-looking people when we finally meandered to the Fairmont’s signature restaurant, Kō. The Hapa Brown wasn’t available there, so I didn’t actually take a break from the Maui Brewing beers–three of them were on tap.

There’s still one working sugarcane factory on Maui, and the menu at Kō, which means “sugarcane,” is an homage to the culinary influence of the sugarcane plantation era.

An ethnically diverse menu includes family recipes from the kitchen’s equally diverse staff, hapa and otherwise, all under the wing of executive chef Tylun Pang. A local legend as well-known for his generous community involvement as his culinary skills, Pang is the author of the award-winning 2010 cookbook What Maui Likes to Eat, giving 100% of the book’s proceeds to the Maui Culinary Academy. 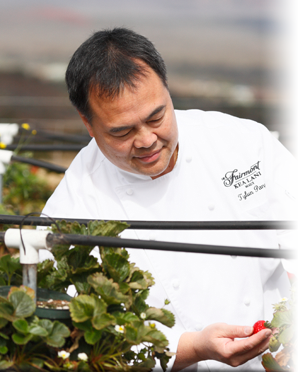 Pang stopped by our table as we were working through one marvelous dish after another, and if self-effacing, he was clearly proud of the staff and restaurant, as well he might be. The Fairmont poured $5.5 million into creating Kō, which opened a year ago April and it has already been named the 2013 Maui Restaurant of The Year.

I was ready to stuff the ballot box after sailing through a Kobe Beef Poke, a Portuguese Bean Soup, and Monchong in a Macadamia Nut Crust. And if the main menu is diverse, it goes still further in creating special menus for about every known dining predilection—Dash/Heart Healthy, Sugar Balanced, Vegan, Macrobiotic Meal, Gluten-Free and Raw. 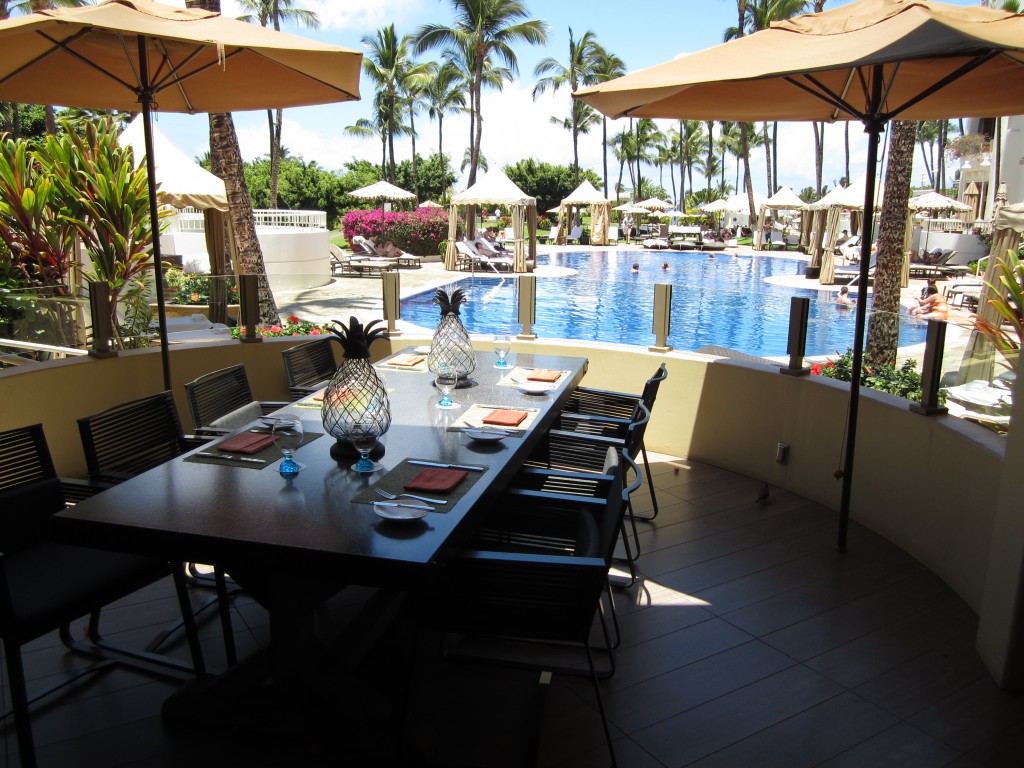