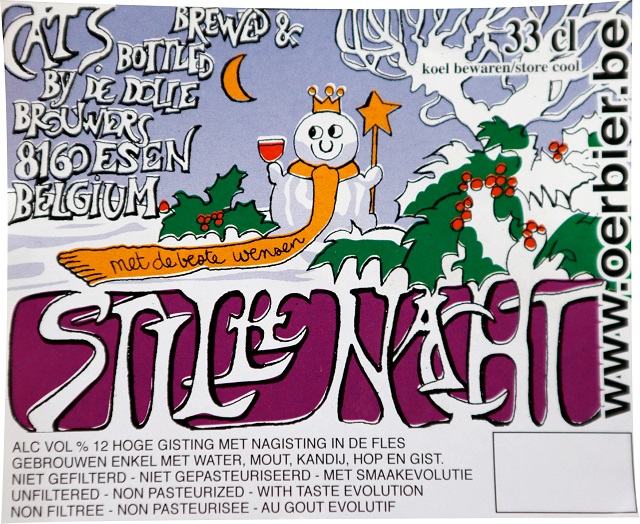 I may be getting on a line somewhere in mid to late October, when the 2018 version of Stille Nacht is released in the U.S. by B. United International. The importer won’t even receive the bottles of this year’s batch until mid-January and, according to B. United founder Matthias Neidhart, “The fresh beer is driven by malt sweetness, it’s extremely sweet, and we like it to settle down to a point where it’s more balanced.”

Neidhart didn’t want to say the beer was then “better,” but clearly he preferred the beer somewhat aged, when the hops begin to assert themselves more and the beer becomes more rounded.

De Dolle Brouwers (“The Mad Brewers”) founder, brewmaster and label artist Kris Herteleer waits until late September or early October in order to use fresh Nugget hops in the beer, and some candi sugar also goes into the mix. De Dolle had been around since 1980, housed in a small former brewery dating back to 1885.

All of the De Dolle products (best known in the U.S. are the Oerbier and Arabier) are bottle-conditioned, and when you’re talking about a 12% ABV beer as with the Stille Nacht, aging is not going to hurt and may well improve the beer over time. 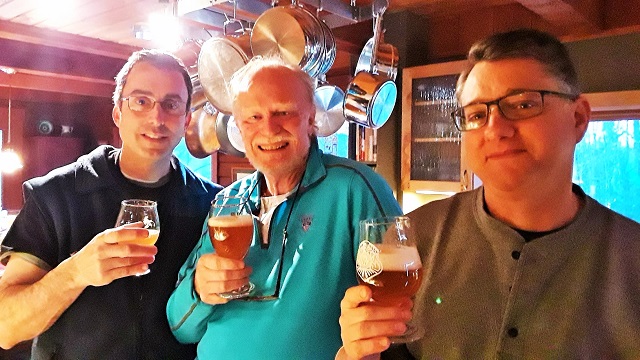 Certainly, our main trio of tasters had no complaints and nothing but compliments, about a beer made at the tail end of 2017. It was mid-afternoon by then. Our Christmas Day had begun slightly after the 9:30 am time decreed on Christmas Eve by our youngest grandchild, Lilah. The oldest, Nate, was pushing for 10 am. He was overruled, but it turned out to be a compromise in any case.

By then everybody had brushed their teeth, latched unto the first cup of coffee, and were ready to dig into our filled stockings. An abeyance for breakfast, and then unto the bulwark of presents surrounding the tree. It was, as always, despite the occasional but expected misfire or wrong size, great fun. Personally, I was astounded, pleased, excited and touched to find that my wife had given me an electric piano.

Our traditional Italian Christmas dinner was set for 4 pm, so we didn’t have a lot of time to sneak in a tasting. We managed; my son and son-in-law again filled out the tasting panel, and we eventually passed the beer around to my wife, two granddaughters, and Judith Etienbled, the French foreign exchange student my son and his wife have taken in for the rest of the school year.

Amazingly, everyone liked it. This is rarer than rare. My granddaughters don’t like beer at all, but even they and Judith gave it at least a non-retching grade. My son, Mike, is rarely a fan of high ABV beers. He was of this one. “Oh, I like it,” he said. 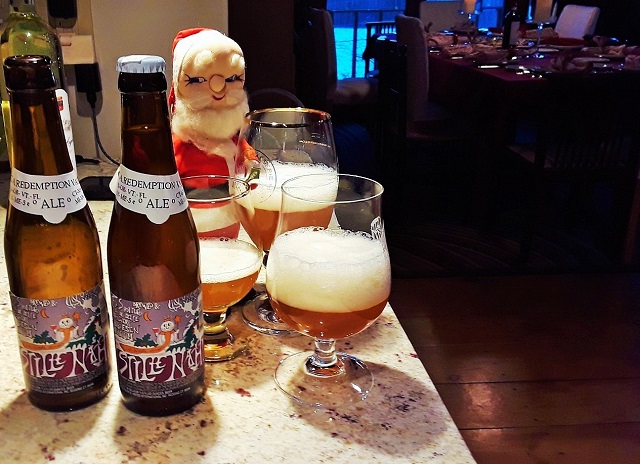 Son-in-law Glenn was finding a bit of peach and nectarine in the nose, I picked up some lemon notes, my wife detected some clove. There was a big mouthfeel, and while certainly malt-accented sweet, there is nothing cloying about the beer. It finished tart, like the end of a piece of fruit you’ve eaten, Glenn said.

There’s certainly some alcoholic warmth, though not a burn going down, but even with sharing two 11.6-oz. bottles, we were soon feeling the beer. “The word ‘strong’ comes to mind,” said Glenn. Perhaps the beer to have when you’re not having more than one. But he also said, “It’s really good, very nice, very refined.” Well said.

Truth be told, after dinner the rest of our night wasn’t that refined. I gave my wife a new game called “Exploding Kittens” in which all players but the eventual winner are killed off one by one by, well, exploding kittens. None actually harmed in the playing of the game, I hasten to add. So mostly we were laughing and digesting.

Eventually, as seems to be the rule on these Christmas season nights, I was the last to go to bed, once I had set up some coffee for the morning, put some water in the tree stand, pulled the plug on Christmas lights and damped down the woodstove.

Unlike recent years I’d managed to sample the 12 Beers of Christmas in consecutive days. And if modestly rueful at closing things out, at least it seemed like we’d had the best possible beer for the purpose, Stille Nacht being Flemish for Silent Night.