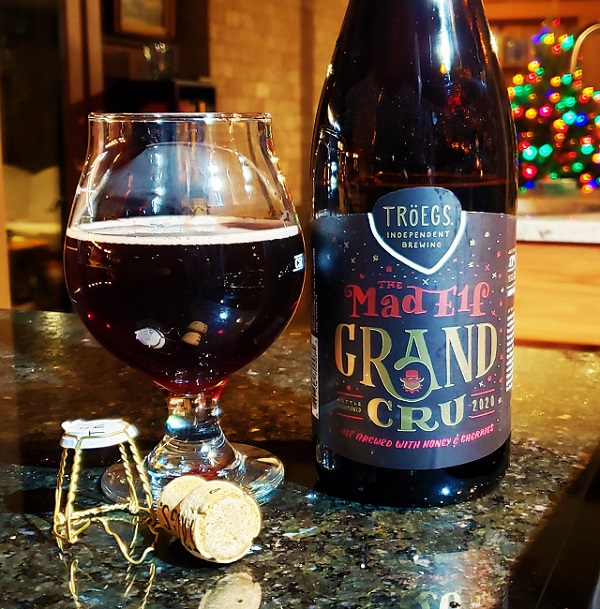 Yes, I reviewed Troëg’s Brewing’s The Mad Elf in the 12 Beers of Christmas 2013. But this isn’t the same beer. Similar, yes, to the regular Mad Elf, which pretty much put the brewery on the map (in Hershey, Pennsylvania) when it was introduced in 2002. 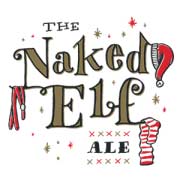 The wildly popular Mad Elf has a few other spin-offs—Naked Elf, a stripped golden ale version without the cherries, honey or chocolate malt; Wild Elf, a soured version, and the Grand Cru. Even the Grand Cru has a brewery-only spin-off, a bourbon barrel-aged version that fires up to 13.3% ABV. 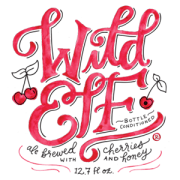 Eleven percent was plenty for me. I started drinking this beer at 5 pm—during our Brattleboro Literary Festival Zoom cocktail party (yes, plenty of talk about books)–and was still sipping five hours later. It’s a 750 ml bottle, caged, corked and bottle-conditioned, and it’s a sneaky one in that there’s little apparent alcoholic strength in the nose or palate. Go slow. 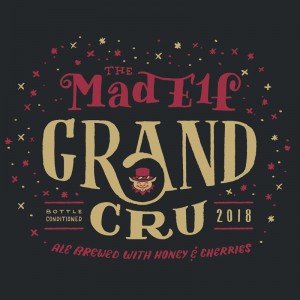 As with the regular Mad Elf, the Grand Cru version is loaded with cherries and honey and the same grains (chocolate, Munich, Pilsner), hops (Halletau and Saaz) and yeast. The latter, called a spicy Belgian yeast, is surely a Duvel clone. That classic Belgian golden ale is on deep background in these beers. Actually, not that deep.

So what’s the difference in the two versions, the thing that makes brewery founders and brothers Chris and John Trogner call the Grand Cru “the Director’s Cut”? It’s the cherries. Regular Mad Elf is made with Bing, Lambert, Van, and Royal Ann cherries, all on the sweet side. Maraschino cherries are virtually always Royal Ann (or Anne).

The Grand Cru is made with Balaton cherries, and thereby hangs the tale. Mad Elf is quite sweet. Grand Cru is not. The Grand Cru pour out a dark reddish brown, but mostly red, with a reddish tinged head. There’s not a wild nose to the beer, but cherries are immediately evident in a solid malt base. The cherries flood the palate, which is tart and sharp as a knife edge, the mouthfeel falling just shy of metallic. There is a swirl of spicy impressions, but the tart cherries hold sway throughout.

Later, as though on a slow-burning fuse, there’s a gradual blossoming pucker that takes over your gums and lips in a pleasingly anesthetic manner. The beer is an experience, and for my money ($14.99 in this instance), a wholly pleasurable one. A great beer to end this year’s series. 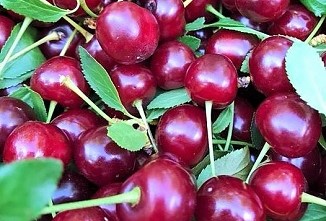 But if Balaton cherries are the main story in the Grand Cru, what’s the story behind the Balaton cherry? Turns out there is one, although there might not have been without the Communist takeover of Hungary after World War II, and the introduction of collective farms. They gave rise to an agricultural goal of finding the best varieties of various crops to plant.

A Michigan State University researcher discovered all this in the 1980’s, looking for a breed of sour cherry that might be more weather resistant than the Montmorency, the dominant crop in Michigan, which produces roughly 75% of the tart cherries in the U.S. 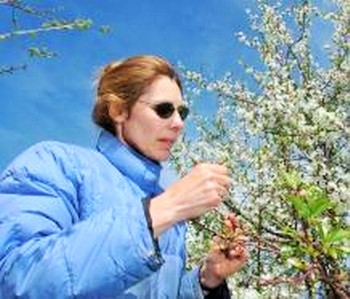 So Professor Amy Iezzoni, who would appear to be the sole tart cherry breeder in the country, brought some cuttings home. Long story short, the Balaton cherry took off. It hasn’t knocked the Montmorency from the top spot, but it has its champions, and certainly has showed up in any number of American beers.

The cherry is so named, Dr. Iezzoni told a reporter from NPR, because “Újfehértói Fürtös” certainly wasn’t going to work: “If you look at a Hungarian map, about the only thing an American can pronounce is Lake Balaton. So we named it after Lake Balaton.”

Hungary, and Újfehértói, used to receive a royalty for each Balaton tree sold in the U.S. and may still, though I haven’t confirmed this. (I’m hoping Dr. Iezzoni will let me know.) (Postscript, 1/13/21: And so she did! She wrote, “MSU licensed multiple nurseries to produce and sell trees under the Balaton trademark. The royalties were shared with Hungary during the terms of these licenses. Most of the licenses are now fully-paid-up.”)

Well, we’ve done it again. Twelve beers in 13 days this year, all worthy, with a slight disclaimer for the Canaster Winterscotch. I have plenty of this year’s beers left over, so they’re be stretching into the new year ahead.

Which, I know, we’re all looking forward to. Some wit came up with notion that unlike most years, 2021 will have 2020 hindsight. In the rear view is where most of us will be happy to keep it, in hopes, and expectations, that many things, if not all things, are going to be better going forward. And, naturally, I’ll be drinking to that. Cheers, and Happy New Year.