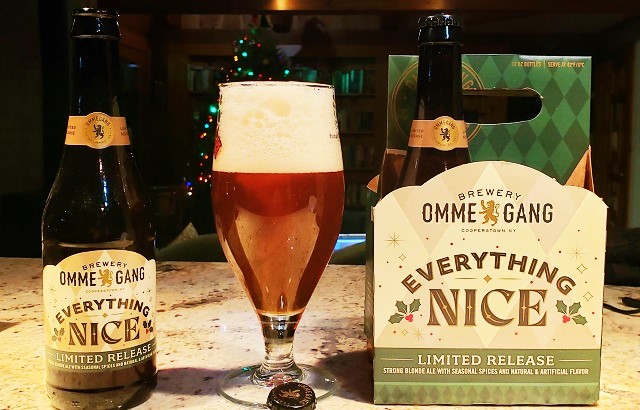 We might as well pursue the Belgian linkage given to us, in that yesterday’s Chouffe N’ice is brewed by Brasserie d’Achouffe, owned by Duvel Moortgat, as is Brewery Ommegang, albeit the latter is in the U.S. I’ve written many times before about Ommegang in Cooperstown, New York, for one prevailing reason—everything it makes, or at least everything they’ve made that I’ve tried—is excellent.

I’m a sucker for Belgian beers and Belgian-style beers to begin with. There’s something in that Belgian yeast that just rings my bells, Christmas or otherwise. Granted, there are many different Belgian yeasts, but there’s something floral and sweet in most of them that are just plain different from the yeasts you’ll find in your average IPA, say and world’s apart from a Pilsner (unless you’re drinking Stella Artois, of course, and why bother? I say).

Throw in some funky Brettanomyces as in Orval Trappist Ale, and you’re in a whole other world entirely. Most Belgian beers also steer clear of excessive hopping, which can quickly put off some hop heads. Although, not me, and I’m certainly fond of hoppy brews, too.

But enough generalization, what about the beer at hand? It’s a pretty archetypal strong Belgian blond beer base. Think Duvel, a world classic brew, and it’s not much of stretch, considering the beer’s parentage. Duvel is actually well-hopped compared to most Belgian beers, with Saaz and Styrian Goldings. It clocks in at 8.5% ABV, and this one just a notch above that. 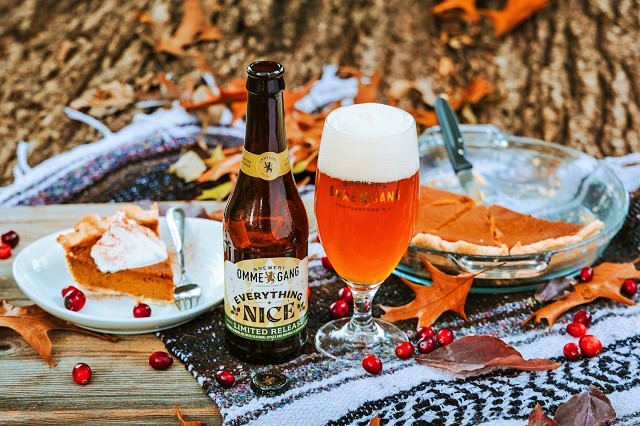 But then the holiday fun begins. Everything Nice is hopped with Citra, and spiced with cinnamon, ginger, nutmeg, cloves and white pepper. It’s a bright amber brew with an immense rocky white head. The nose is predominately cinnamon, an almost overpowering Cinnabon aroma that will make you think you’re walking through an airport. I picked up some banana esters, too.

And while the flavor is mildly sweet, the other spices and yeast, and particularly the white pepper in the finish, cut through any sense of an overly treacly brew. The pepper seems to linger on in the aftertaste. In the end it goes down easy, with little hint of its potency, so approach with care.

The beer appeared in the fall and the Ommegang website photo suggests it might be as appropriate for a Thanksgiving as well as a Christmas table, but the sprigs of holly on the four-pack carrier seem to situate it right in our wheelhouse.

I picked up the beer barely thinking about it name, vaguely pondering it was part of a Christmas carol. Then I realized it was, of course, really part of the nursery rhyme differentiating boys and girls. I’m sure the brewery was thinking less of the sexes and simply more about “sugar and spice and everything nice”—what little girls are supposedly made of, but the beer decidedly is.

The lines are usually attributed to English poet and nonfiction essayist Robert Southey, a contemporary and friend of Coleridge and Wordsworth. In 1813 he was appointed Poet Laureate, a post he held for thirty years until his death. 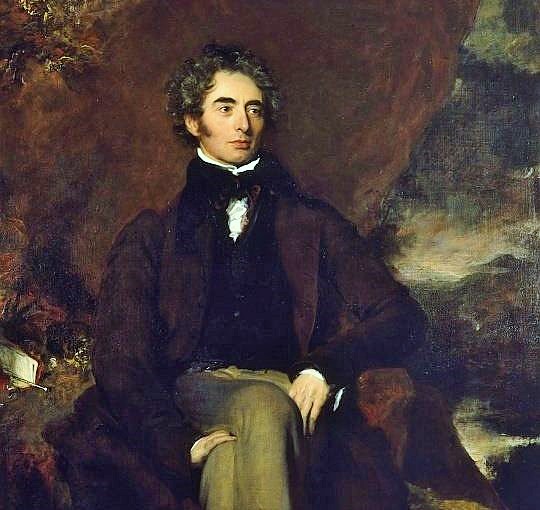 Southey was a serious and prolific writer, but his works are little remarked upon today. He is probably most known, and would likely be appalled to hear it, for the tale of “The Three Bears,” later adapted into “Goldilocks and the Three Bears,” and the rhyme about what little boys and girls are made of—a poem that goes on quite a bit more than that.

“What All the World Is Made Of” also speculates on the composition of little babies, young men, young women, sailors, soldiers, nurses, fathers, mothers, old men, old women and all folk. But even the rest has faded away. If Southey should reappear to learn the dispiriting news maybe we could at least slide a glass of Everything Nice to him across the bar. Might help.