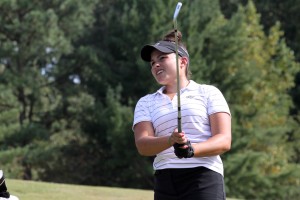 The normally upbeat West Hartford native and star of the Wake Forest University women’s golf team was tired, worn out really, and it was affecting her play. This wasn’t the way her junior season was supposed to go.

Sheary was coming off a brilliant sophomore year during which she won the Atlantic Coast Conference Championship and was named ACC Co-Player of the Year, was chosen for the All-ACC team for the second straight year and received honorable mention All-America honors. She was a hot ticket on an upward path to stardom and the professional tours.

Even hampered by a nagging and undiagnosed illness, Sheary’s 2010 spring was good by many players’ standards but not her’s. She slipped to fourth on the team in scoring with a 75.2 stroke average and only three of her 30 rounds were played at par or better. Despite her physical problems, the 21-year-old still helped the Demon Deacons to their second straight ACC title and finished 15th at the Conference tournament.

“I was playing in tournaments last year when I was sick and I didn’t realize just how sick I was. I was coughing all the time and it affected my strength. I didn’t understand what was happening to me and I was getting very frustrated with myself. I would try and do workouts and I would turn red in the training room.”

After the 2010 season ended, Sheary’s father, Michael, took her to see a doctor who diagnosed the problem.

“There were a few signs early on I guess,” said Natalie. “I had a couple of bad sinus infections, then bronchitis, which had finally tuned into asthma.” She was prescribed steroids and began using two inhalers to help clear her lungs and moderate her breathing.

“I’m feeling much better right and dealing with it,” she said of her condition.  “Looking back on last spring and knowing that I wasn’t doing the things I should have been doing and was still able to play and help the team showed me just how strong I am.”

Relieved that the condition was finally diagnosed and treated properly Sheary bounced back last summer and won the Connecticut Women’s Open, posting the only two under-par rounds of the tournament and winning by a whopping eight shots. She was also medalist at the U.S. Women’s Amateur qualifier at The Ranch Golf Club in Southwick, Ma. with a 72, and tied for 33rd at the Futures Tour’s ING New England Golf Classic held at Wintonbury Hills Golf Club in Bloomfield, Ct.

“I had just started using the inhalers when I played in the Connecticut Women’s Open and a good thing was that I could use a cart during the tournament. Beating a lot of good female players was nice win and it was a good feeling to be able to go out and focus on my game and not worry so much about being sick. My dad was there caddying for me and he always calms me down.”

Michael Sheary introduced his oldest daughter (he and wife, Linda, have another daughter, Jennifer, who plays tennis) to the game at a young age.

“My father always played golf but I played a lot of basketball growing up. He surprised me one day with golf lessons at Rockledge Country Club (West Hartford, Ct.) and I really loved the game. I started practicing every day.”

She became a top junior player and was a member of the Conard High School girls team as a freshman. She stopped playing high school golf after her freshman year because of her many commitments to junior tournaments. She recorded 13 top 10’s on the American Junior Golf Association, including four wins, and in 2006 she won the Connecticut State Women’s Amateur title as a 17-year-old.

Sheary worked at Gillette Ridge Golf Club in Bloomfield for a season after her junior year of high school and was a member of Rockledge and Wampanoag Country Club (West Hartford, Ct.) before heading off to the David Leadbetter Academy in Florida as a high school senior to refine her golf and continue her studies.

“I don’t belong to any club right now,” Sheary said. “I’ll play at Wampanoag or Shuttle Meadow (Country Club in Kensington, Ct.) when I’m home and go over to Wintonbury where the ING New England Golf Classic is played. I played a lot of golf with my dad but don’t anymore because he has some back problems. But he’s always around when I’m competing and training.”

Sheary spent a month this past winter at home in West Hartford, practicing and taking lessons from her longtime coach Dave Pianki, who works out of Tower Ridge Country Club in Simsbury, Ct.

“I’ve worked with Dave for eight or nine years. Even when I was at the Leadbetter Academy and now at school I send him videos to watch and tell me at I’m doing.”

During her stay at home this winter she practiced as much as she could in the severe weather conditions the state experienced.

“We would go over to Golfer’s Warehouse, practice putting and hit golf balls into the net. I went on the launch monitor a few times to see where my swing was. I didn’t do as much as my teammates who live in warm weather areas but I kept busy.”

She returned to Wake Forest in mid-January to prepare for her senior spring season, which she hopes will be a fitting cap to her collegiate career. The team began its season at the Northrop Grumman Regional Challenge in Palos Verdes, Ca. in mid-February and will conclude its 2011 campaign, the Demon Deacons hope, at the NCAA Championships in mid-May. The ACC Championships will be held the middle of April at Greensboro, N.C.

“I decided to attend Wake Forest early, at the end of my junior year of high school,” said Sheary, who stands 5-feet, 6-inches and plays right handed. “I loved Wake Forest right away. It’s a small school and I’m not a loud and crazy type, so I like the mellow and quiet. They have great sports programs and facilities.”

Sheary made an immediate impact at Wake Forest. During an abbreviated fall golf season in 2007 she led the team in scoring and did the same in eight events during the spring of 2008. She won the Northrop Grumman Regional Challenge, becoming the first Wake Forest freshmen to win an event in 10 years. She finished first for the Demon Deacons in six tournaments, was named an honorable mention All-America, ACC Freshman of the Year, and made the All-ACC team.

She continued her stellar 2008 play during the summer, finishing second at the Duramed Futures Tour’s CIGNA Golf Classic, the highest finish by an amateur in a Futures Tour event in eight years. She also qualified for match play at the U.S. Women’s Amateur, losing in the first round.

Her superb sophomore season followed in 2009 and that summer she again qualified for match play at the U.S. Women’s Amateur and won a first round match.

Wake Forest head coach Dianne Dailey is thrilled to have had Sheary for four years and predicts big things for her star.

“Natalie is a fierce competitor and she would like nothing more than to beat you.  Her nickname is Zodiac because she picks the opponents she wants to beat.  She understands the swing, equipment, and how to control her shots better than anyone I’ve coached. She is a great student of the game. Natalie is very focused when playing and is always contemplating the next shot.”

She added, “Natalie has been an anchor for our team since her freshman year. She won her first collegiate event in California as a freshman, beating all the Pac-10 players ranked ahead of her. As a sophomore, she took on Amanda Blumenhurst, four-time national player of the year, at the ACC’s and beat her in a playoff to win the title. Natalie is a very tough competitor and has a bright future ahead in professional golf.  She has the tools and the mind to compete and win on the LPGA.”

Which is exactly where Sheary hopes to be soon. Once she graduates college this May (she’s a religion major with minors in American ethnic studies and sociology) she’s set to play for pay on the Futures Tour, which is the proving ground for female golfers hoping to reach LPGA Tour. She was medalist at the Futures Tour qualifying tournament in Florida last November, earning full playing privileges on the circuit this year.

“There will be a lot of former Wake Forest players on Tour, so I’ll know quite a lot of girls out there. I’m also good friends with (LPGA player) Vicky Hurst and she’s been a real help making me understand what it takes to be a professional.”

She plans on debuting on the Futures Tour at the Ladies Titan Tire Challenge in Marion, Iowa in early June. Her father said he will caddy for her “at least at the start” of her pro career. He was with her at last year’s four-day Q-School as well.

Said Michael Sheary, “We’ll see how it works out but I’ll be with her at the beginning and will caddy for her at the tournament at Wintonbury.”

Natalie certainly has the game to make it as a pro. She is an accurate driver of the ball and her intense concentration pays dividends in her iron play. She is aggressive, attacking pins and seeking birdies and eagles at every opportunity, which helps her score low when her putter is hot.

Her idols? “I like Camilo Villegas and his workout regimen. Phil Mickelson is great and I watch his short game video all the time. And, of course, who doesn’t like Tiger.”

Fellow competitors have found out just how much a tiger Natalie Sheary is in her own right. Now that she’s feeling physically sound and mentally relaxed, the West Hartford product is ready to set the world on fire. A perfect place to make a big splash would be at her home state’s tournament, the ING New England Golf Classic, which will be played at Wintonbury Hills Golf Club July 15-17.