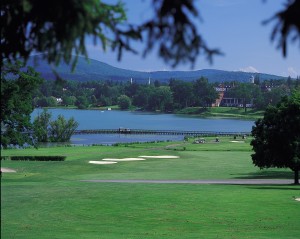 While Rory McIlroy got all the credit at the recently concluded U.S. Open at Congressional Country Club, and deservedly so, the man who really made it all possible hardly drew much mention. Congressional is perhaps Devereux Emmet’s finest work, and a much underappreciated course designer he is.

Emmet, who died at the age of 72 in 1934, was the son of a judge and a descendant of Thomas Addison Emmet, a founder of Tammany Hall. Indeed, the Emmet family was listed in Ward McAllister’s First Forty Families in America and Devereux Emmet and prominent (and controversial) architect Stanford White married sisters who were nieces of financier A.T. Steward.

Emmet was a prolific course designer in the early 1900’s. He was exposed to course architecture by his friend C.B. MacDonald who, at the time, was working on The National Golf Links.

Perhaps without even knowing it, many of us in the Eastern U.S. have had the pleasure of playing Emmet-designed courses, some of which have been retouched over the years to either add length, move bunkers around to fit today’s modern equipment and players, or redo aging greens. I personally think one of his finest, albeit not his most notable, lies just outside what many consider the baseball capital of the world, Cooperstown, N.Y., the Leatherstocking Golf Course at the Otesaga Resort Hotel.

The Leatherstocking is a finely maintained classic, designed by Emmet in 1909. The course has received the second highest overall rating for public courses in New York, New Jersey and Connecticut, according to Zagat Golf Course Survey, and has been awarded 4 1/2 stars by Golf Digest and voted 55th Best Golf Resort in the U.S. by readers of Condé Nast Traveler Magazine. The course was given a bit of an upgrade by Bob Cupp a few years ago and now measures 6,416 yards from the tips.

But it isn’t length of The Leatherstocking Golf Course that is really the issue. This is just a very pleasant place to play a round of golf, as the layout sweeps along the western shore of Lake Otsego, the Glimmerglass, made famous in James Fenimore Cooper’s novels of the area.

The middle holes climb to elevated fairways and tees that provide sumptuous views of the lake (which really does seem to glimmer in the late morning and afternoon sunshine).

This is old-school golf at its best, with the layout following the natural contours of the land upon which is was routed. The par-fours range from short and quirky to beefy, and many are complicated by their dogleg designs and elevated greens. And the putting surfaces! The greens are kept on the slick side, somewhat unique for a resort course, and with their at times diabolical undulation, a 20-footer can quickly turn into a three-putt if you don’t employ a butterfly’s touch on the flat stick.

One of the best holes on the par-72 course is the 11th hole, a 560-yard five par that tumbles sharply down a hill to a huge green that sits in a swale. A 40-yard chip shot can turn into a disaster if not played correctly off the sheer down slope that meets the green at its base.

But the real fun comes at the end of the round when you are brought back to Lake Otsego.

The 16th is a 366-yard par-four that starts from an elevated tee box. It calls for a straight tee shot in order to find a fairway landing area between a pond to the right and bunkers to the left. The approach is over a stream, with the lake acting as a backdrop.

The 17th is a really good par-three, measuring 182 yards from the tips. It also plays across water to a green that slopes from back to front with the pond running up almost to the edge of the putting surface.

The round culminates with a 515-yard par-five with the tee box sitting on a small piece of land in the lake. You can while away a few minutes waiting for the fairway to clear by gazing at the largemouth bass that make their home near the tee box.

Bite off as much of the dogleg as you dare and you are left with a second shot that must steer clear of the lake that hugs the left side of the fairway all the way to the putting surface. The green sits almost directly below the veranda of The Otesaga Hotel.

The Otesaga Hotel is a first class place to unwind and enjoy a post round meal and cocktail, either on the terrace or in one of the hotel’s several dining rooms.

By the way, the Otesaga has been a haven for travelers since it opened in 1909. Check out the old photos that adorn the walls of the Hotel’s corridors and if you stay overnight, try to get a room that overlooks the lake. Massive trees surrounding the 18th green (and the green itself) are floodlit and makes for one awesome sight for even non-golfers on those clear, cool evenings that appear often in Cooperstown.

It isn’t Congressional or one of Devereux Emmet’s other masterpieces. But the Leatherstocking Golf Course is approachable and attainable for all of us. And it’s a real treat to play.