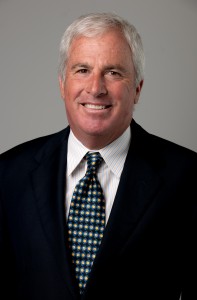 World Golf Hall of Fame member Curtis Strange, an analyst for ESPN’s coverage of golf and a television commentator since joining ABC’s golf coverage staff in 1995, was one of professional golf’s dominant players in the 1980’s.

He won back-to-back U.S. Opens in 1988 and 1989 and led the PGA Tour in money winnings in 1985, 1987 and 1988. He scored 17 Tour wins in his career and had a streak of seven years with at least one Tour victory. He was voted Player of the Year by the Golf Writers Association of America three times. Strange also represented the U.S. on the Ryder Cup team five times and was captain in 2002.

Born into a golfing family, Strange began playing at age 7 and won the Virginia Junior Championship when he was 15. He earned a scholarship to play collegiate golf at Wake Forest and was part of what many believe to be one of the best college golf teams ever. Strange and teammate Jay Haas, another future pro, led the team to consecutive NCAA titles in 1974 and 1975. A three-time All-America selection, Strange won the NCAA individual golf title in 1974 as well as the World Amateur Cup.

Strange, who still plays on the Champions Tour, turned pro in 1976 and scored his first professional win in 1979 in Pensacola, Fl. In 1988, he became the first golfer to win more than $1 million in a single season. He played his first season on the Champions Tour in 2005 after reaching the age of 50, and was inducted into the World Golf Hall of Fame in 2007.

His father, Tom, owned a golf course in Virginia and his identical twin brother, Allan, also played on the PGA Tour.

I caught up with Strange at his home in North Carolina recently.

CS: The weather has been so darn nice down here I’ve been playing a lot between working for ESPN and playing on the Champions Tour. I’ve been down in North Carolina for seven years and I have a bunch of guys I play with, the local pro, assistant pro and a few other guys that are real good players. We have some fun matches.

GM: Do you miss competing on Tour?

CS: I still pay in eight or nine Champion Tour events and I like that. But I really enjoy the television work and am looking forward to being a hole commentator for ESPN this year.

GM: How have you changed as an announcer?

CS: Well, hopefully I have improved! I think you should improve at anything you do a lot. But, you know, I don’t worry about it. I’m in a different position now than when I was an analyst. As a hole announcer, you have to set the stage and tell the viewer what the player faces. As an analyst, you react to something that has happened. Being a hole announcer stretches me and I like that.

GM: What do you feel your strengths are as an announcer?

CS: I have knowledge of players and the golf courses and the nuts and bolts of the game. Hopefully, I’m warm and charming at times and I can also bring the viewer closer to the game.

GM: Do you feel it is your job to criticize players when they hit a bad shot?

CS: I once said that criticism is not part of my job description as an analyst and TV critics jumped on me about that. But I would rather give the reasons why a player tried a certain shot or didn’t. You can offer criticism in different ways. Instead of saying, as another announcer does quite often, things that are obvious and cruel, I prefer to make a comment that tries to explain what happened and give the reasons for it.

We in television and those who watch it closely think everybody has to hang on every shot. But we need to be patient because the tournament is four days and four rounds. The talking heads on television feel they have to embellish every shot that is hit on a Thursday, and I understand there is a need to comment and fill airtime. But I like to let a player get over a shot and hit it and not have all the chatter that sometimes takes place early in the tournament, especially.

GM: Okay, the Tiger question. How big was him winning at Arnie’s tournament, Bay Hill?

CS: It was huge. You know, you never get much from Tiger and you wonder if he is just doing his power point presentations. But whenever you have been down to win again was big for him. Golf is better off with him playing well, whether you root for or against him.

GM: Have you read Hank Haney’s book about Tiger?

CS: No, and I won’t. I have read excerpts and let’s just say I found it interesting. The guy and Tiger Woods had a confidence in one another and Haney broke the rules. I think it was very unprofessional of him because real men don’t do this to one another. It’s about trust; it’s a macho thing, if you will. I like Hank Haney but he broke the rules. A confident who broke rules, who was very unprofessional for doing it. Look, we all can delve into somebody’s mind…sports psychologists, coaches, announcers, caddies and even bag boys. But he broke the confidentiality rule and I don’t like it.

GM: Okay, I’m sure you are asked often about your back-to-back U.S. Open victories the last time it has been done. Does that define your career?

CS: It’s usually brought up around U.S. Open time every year. It’s fun to be a part of the team that does the U.S. Open and winning those two events made me, basically, everything that I am. I had a long, pretty successful career in golf and those two U.S. Open wins were highlights.

GM: Any ones that got away that you still think about?

CS: Well, the 1985 Masters. I felt like was mine to lose and I didn’t win. I missed a playoff in the 1994 U.S Open by a shot. There were others that I thought I should have won. But I never got on myself too badly about not winning. For me, it was about playing well and if I did that I was happy with myself heading into the next tournament. I could have just made the cut and then went on to a top 10 or top 20 finish and that was great and I was feeling good about my game. You just try to put yourself in position to win and sometimes you do. It is a long, long year and I always tried to find something good about my game to give me momentum into the next event.

GM: Was there a tournament you won early in your career that allowed you to think that you had what it took to be a great player?

CS: It really wasn’t so much one event or even a round. It was just sort of a momentum thing. I won a tournament, then another, then won money titles, then the Opens and it gave me such a confidence in my game that I never doubted myself on Sunday. Listen, I had been there and thrown up on my golf shoes enough times that when I finally got that confidence in myself I felt comfortable on Sunday and relaxed and just played golf. I do remember though, winning the Memorial. It’s a big tournament, Jack’s tournament, with a big field and a lot of pressure. I was so comfortable on the back nine on Sunday that I was hitting great shots and I was reaching my peak.

GM: How do you feel about the state of golf?

CS: I feel good about the game as a whole. Like any other sport, it’s cyclical and like all other aspects of life affected by the economy and money. The players on Tour haven’t been affected to a large degree because we have great corporate sponsors and the players are making good money off the golf course. The PGA Tour is solid. But golf in general still suffers from being too slow and too expensive for many people. You have to remember that golf is a privilege to play and maybe we have forgotten that a bit. It’s great to try and bring the masses to the game but we have to follow up and give everyone who wants to come to the game an opportunity.

We’re trying to attract young professional families but dad or mom doesn’t have the time or energy to dedicate weekends to playing golf. I would like to see caddie programs instituted at every club. It’s a way to get kids from all backgrounds playing the game so they can sustain it down the road. That was the way a lot of great players came to the game at one time, Hogan, Nelson and others. Golf carts finance many clubs but it has hurt the caddie programs and hurt the growth of the game in that regards.