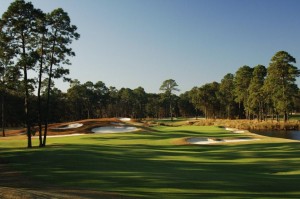 Hilton Head National Golf Club in Bluffton, S.C. opened its tees, fairways and greens in 1989 and has gained a well-deserved reputation as one of the premier public access course in the region.

Hall of Famer Gary Player, with over 200 golf designs in his international portfolio, and former PGA Tour Architectural Consultant and winner of numerous golf design awards Bobby Weed collaborated to rout two nines that carry the two men’s distinctive design philosophies to create a unique experience that makes the golfer utilize every clubs in the bag.

Weed’s, 3,357-yard (back tees), par-36 front nine at Hilton Head National Golf Club is an ideal complement to the Player nine. Weed’s layout also offers plenty of run-up opportunities to the greens, which are generally a little larger than Player’s but with more severe undulations.

The par-three fourth hole demands a carry over a waste bunker that takes up most of the yardage between tee and green. But it’s what some might call the signature sixth that is a perfect example of a great risk versus reward hole. Under 300 yards from the tips, just 250 to 275 yards from the middle tees, it’s one of Weed’s ultimate dare-you-to-try opportunities. The largest lake on the course runs down the entire right side, then wraps around behind the green, while pot bunkers and the course’s largest berm rise up to snatch shots hit left or short.

The 3,298-yard (back tees), par-36 Player back nine begins with three increasingly longer par-fours. The third hole plays 420 yards from the tips with water down the entire left side on the dogleg left and trees encroaching on the bailout area to the right. You will be left with a long approach shot that will have to negotiate four mounds to find a smallish green.

The fourth hole, a medium-length par-three, seems fairly uncomplicated but you had better not miss the table top green with your tee shot.

The fifth hole on the back nine has a huge waste bunker in front of the par-four; a large greenside bunker on the par-three sixth causes problems; and the par-five seventh hole is Hilton Head National’s number one handicap hole.

The final hole the back side might actually be the most demanding, with marsh all the way along the right side of a narrow fairway and pinching in close to another table top putting surface the hole shares with the ninth hole.