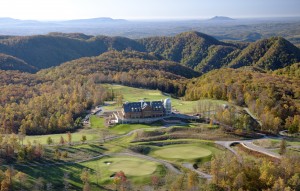 The Lodge at Primland

Amenities at the resort range from a spa and ballroom to fine and casual dining and an observatory. The lodge was constructed with natural indigenous materials, and the building, along with cottages scattered about the mountainside on the 12,000-acre property, were designed to reflect the architectural style of historic structures in the Virginia mountain area.

The Lodge, its accommodations and facilities, are of great importance in the evolution of Primland as it moves into the luxury resort category. The bulk of our customers will come from a 300-mile radius of the property but, because of some of the unique aspects of the property, such as the telescope which can see 27 million light years into deep space.

Primland, which is owned by the Primat family of Switzerland, has a history that dates back more than 250 years when the then Governor of Virginia, Lord Brooke, gave a 60,000-acre land grant to one William Austin.

Over the years the land was used for many purposes, most notably for large-scale timber operations. In the late 1960’s, Georgia Southern, which owned the property at the time, began work on the Busted Rock Wilderness Area, offering six to 12-acre residential sites. The company also installed the first power and telephone lines.

Primland Inc. bought the land in 1977 and began to build access roads into the foothills area, while developing a market for whole tree chips. By the early 1980’s, Primland Kinlin became the largest distributed wood bundled product in its marketplace.

Primland was selected in 1986 as the umbrella name for the property’s various companies that by this time included a large reserve where visitors could enjoy hunting, sport shooting, fishing and horseback riding.

The Primat family moved into the golf business when they opened the highly acclaimed Highland Course in 2006. World-famous links course architect Donald Steel designed the layout, which rambles over the mountaintop and around the new lodge and fairway cottages that were built several years ago. Golf Digest ranked it the best new public course in its category in 2008.

Steel and company has built some 70 new courses in 20 countries since 1987, including three others in the U.S.–Cherokee Plantation in Yemassee, S.C., Carnegie Abbey in Newport, R.I., and The Vineyard on Martha’s Vineyard, Ma.

Steel, a Scot who is also an author and editor of several books on golf, created a course that moves easily over the terrain and imbued it with an understated, almost wild elegance befitting the nature surrounding the layout.

Appropriately, the course starts with par-five that slides down a hillside and ends at a green where one is dazzled with majestic views of The Pinnacles, monumental rock walls, and the Dan River Gorge several thousand feet below. One scribe called the valley, “the Grand Canyon with trees.”

There is a sense of remoteness about Primland, a sense of escape that is special. Golf courses have been built in every landscape imaginable, but rarely on mountain peaks.

Just getting to Primland is an experience. After driving along bucolic country roads, one must then journey several miles on dirt roads, past wildlife and native flowering shrubs to reach the clubhouse, perched atop an outcropping that affords another stunning view of the valley.

It is this feeling of tranquility–as well as the world-class golf course, a myriad of other sporting activities and amenities, and lodging that now ranges from rustic to lavish–the owners of Primland believe will attract visitors from around the country and, indeed, the world.

Original plans were for the construction of a second course on the property to be located in the lowlands area of the vast parcel. In addition, there has been consideration of developing a limited number of parcels of land as building sites for single-family homes. Both plans have been put on hold.

The development of a second course at Primland is something that has been discussed and therefore remains an option for the future.