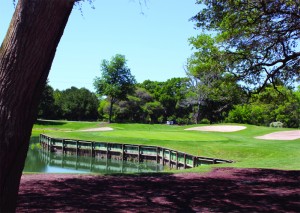 I’m going to tell you about an overlooked little gem of a golf course in the Charleston, S.C. area, Oak Point Golf Course.

It’s easy for Oak Point to get overshadowed, for it it lives in the shadows of the fabulous resort courses on Kiawah Island, including the fabled Ocean Course, home to this year’s PGA Championship. Oak Point is the first course you will run into when you make the drive down Rt. 12 and past live oaks draped with Spanish moss to Kiawah Resort, which has five public-access courses in all.

Oak Point is different in some respects than the other Kiawah courses. It was added to the stable a few years back and is actually “off-island. Tip: Make sure you check out a funky little restaurant on Main Road (that turns into Bohicket Road that turns into Betsy Kerrison Parkway) called Chez Fish, after a round at Kiawah. The tomato basil and crab bisque is out of this world.

The Resort purchased Oak Point in 1997 and immediately set about restoring and enhancing the Clyde Johnson creation. The track is laid out over a former cotton and indigo plantation and is within close proximity to the Kiawah River and Haulover Creek (love those uniquely Southern place names).

If you like looking at water you’ll love Oak Point. Every hole, save one, the par-four 16th, has water in some form and often the wet stuff must be crossed on the tee shot or approach to the greens. But that’s what makes Oak Point so much fun. If you put your tee shot where you should, navigating the layout is relatively straightforward. The par-fours and three threes are not long and thus you can attack them with nothing more than mid- to short-irons. The par-fives are all about 500 yards in length from the back tees and therefore very approachable for players of all skill levels, especially if you play down a marker or two, which is advisable on a first try.

Brandon, my son-in-law and a local, claims Oak Point is kind of a forgotten course because it is not located directly on the island but right before it, and is often passed by golfers heading to Kiawah proper. He told me before we played, perhaps in an effort to rattle the old guy, a pond that encompasses the first green and tenth hole approach is home to an alligator nest that has “some of the biggest gators I’ve seen besides The Ocean Course.” He swears there’s an even bigger gator in a pond that splits the 10th and 13th holes. He says he hit a shot perhaps 20 feet from Megagator, which made it very difficult to concentrate on his second shot on the par-five 13th. That’s another great aspect of playing golf on Low Country courses; you have built in “gator excuses” for bad shots that you can’t use in other areas of the country. And, yes on the day we (my buddy Mark joined us) we were warned about a gator that had strolled onto the cart path leading to the next hole we were too play. “He’s a big one, so stay clear.” Sure thing, boss.

I loved the second hole, a 183-yard par-three that has water on the left and behind the putting surface. The seventh is a very cool, 168-yard short hole that has a pond in front, sand flowing down to the water’s edge and a pot bunker in front of the very long green. Just a neat looking hole from the tee.

I thought the 14th, a 345-yarder, to be one of the best examples of a good short par-four that I have encountered in the area. The fairway narrows as it proceeds to the green, and you have to thread the needle if you hit driver in order to leave you with nothing more than a wedge or nine-iron over water (of course) to the green. You can make easy par or disappointing double here with equal ease.

The best hole of the course was by far the 406-yard par-four 18th that runs along the waterway and offers an amazing panoramic view. Brandon says he’s caught it at the right time of day, when the sun is setting, presenting a breathtaking view of South Carolina’s cotton candy skies.

Again, the daily fee rates at the course are reasonable for such a solid layout, especially during the off-seasons of late fall, winter, and early spring, the latter coming about two months before the North warms up.

My suggestion is to play all four of Kiawah’s “other” courses and then take on The Ocean Course. It will be a cool way to build yourself up for the big treat as you enjoy some great golf in the meantime.

For further information about Oak Point and other Kiawah Resort courses, visit www.kiawahresort.com.