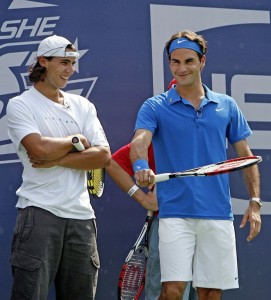 That’s a question that has to be asked in light of Roger Federer’s results in key matches against his two biggest rivals, Rafael Nadal and Novak Djokovic, and, most troubling, a loss to that household name Jurgen Melzer in the Monte Carlo Masters. I mean, losing to Rafa and The Joker are two things, but Jurgen Melzer, a man he had never lost to? Well, something is amiss.

Of course, Roger got beat by Ernests Gulbis in Rome last April and enjoyed another world class year, although he was shut out at the Majors after winning early in Australia. Still, his loses have become more numerous and his last effort against Nadal in Miami was pathetic, lopsided in the Spaniard’s favor.

So what’s the deal? Federer clearly is at the tail end of his career even though he remains a threat in any tournament he enters, especially the Majors, where a good draw and an upset or two of Rafa and Djokovic would clear his path to winning a 17th Grand Slam title. But you’ve got to wonder with those guys are around, can Federer muster enough to beat either.

Nadal is rounding into superb form in the early clay court season. He won his seventh title at Monte Carlo and has been tremendous this week at the Barcelona Open in front of his adoring Spanish fans. He completely dismantled a game but totally overmatched Gael Monfils in Friday’s quarterfinals and appears he will take a bite from another trophy on Sunday, especially with The Joker not playing. Is seems a given at this time that Nadal will win a sixth French Open next month. Nobody should be able to beat this guy on the red stuff in what is now the prime of his tennis career.

But back to Fed. What does he have to do to be a force the Grand Slams this year? Well, he has to adapt his game to counter what Rafa and Djokovic can do, which is play defensive tennis and hurt you with a big shot. Fed has never been one to espouse risky tennis, preferring to probe his opponent for weaknesses and then exploit them with well-timed strokes from the baseline or quick rushes to the net to put away volleys, which he seems to be able to do less and less of these days. What Fed must do is serve extremely well, which he has always been able to do, attack early in points more often, put Rafa and The Joker on the defensive as soon as possible, and play quick points. Remember, his main opponents are in the flower of their manhood and he is pushing 30. It’s hard to tell, but he may have even lost half a step on long points, which can be crushing against guys like Rafa and Djokovic, who can keep rallies going forever.

I don’t think The King is done just yet. He loves to game as much as ever, works hard at it, is fit, and possesses every tool in the book, which is what made him so great in the first place. But he needs to beat Rafa and Djokovic soon or else they will feel invincible against him. And, Father Time is always hanging out in the shadows, looking at his watch, ready to point a finger at the timepiece to the greatest player the game has ever seen.