Urban Meyer, the supremely successful former Ohio State football coach, recently moved back south to take the reigns of the NFL’s Jacksonville Jaguars in what’s called the “First Coast” along the Atlantic Ocean in Northeast Florida. 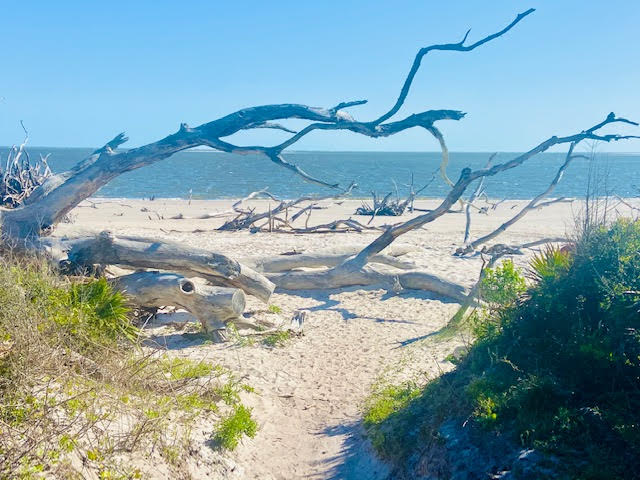 “One of the most successful coaches ever decided to choose Jacksonville to come to because he saw the incredible opportunities other people see here,” said Michael Corrigan, the former city council president who now serves as president and CEO of Visit Jacksonville. We spoke from his 10th floor downtown office and took in the scenic view of the St. John’s River and multiple bridges. “We’re the biggest city in America by area because we encompass all of Duval County. And we’re the first big city you come to when you drive across the Florida state line. We have 1,100 miles of coast, 22 miles of sandy beaches, ad a river running through our city. Many people visit and then move here.”

Former Lansing radio and TV host Chuck Allen moved from Eaton Rapids to the Jacksonville area five years ago and works as a starter at the acclaimed TPC Sawgrass, home of the Players Championship and PGA Tour Headquarters in adjacent Ponte Vedra. He worked at WILX Channel 10.

“While working in Jackson I was discovered by ‘The Sheik,’ Edward George Farhat, and served as a Big Time Wrestling announcer,” he told me as we stood at the first tee. “The Sheik was like a father to me.”

I found a man named Daryll, who caddied in my foursome at TPC and would only give his first name, equally colorful in that he used to train harness horses at Detroit Race Course. “My horse Dusty Jim came in fifth place, but I will never forget Dusty Jim,” he said, showing me the scar on his hand where the horse had bitten him.

Golf isn’t the only walk in the park in Jacksonville. Twenty local craft breweries make up the Jax Ale Trail, and the Timucuan Parks Foundation is vast.

“Jacksonville has the largest urban park system in the United States. Timucuan offers hiking, biking, boating, kayaking, fishing, bird watching, canoeing, and camping in a natural setting to get healthy physically and mentally,” said Felicia Boyd, program and outreach director of the foundation, as we hiked through miles of natural forest which revealed dramatic, unspoiled spots like Boneyard Beach on Big Talbot Island State Parks. “We’d almost like to keep this beach our secret but it’s becoming a popular destination. It’s called Boneyard Beach because the trees have eroded onto the beach to create an unusual landscape of downed trees, bleached limbs and black rocks with tidal pools.”

Chauntelle Isenbeck, who moved down from Toronto long ago, explained the no-longer secret popularity of the “Jax” area as we spoke on the patio at Homewood Suites by Hilton, the full-service hotel at which she serves as director of sales.

“Jacksonville has one of the fastest-growing populations in the country. The cost of living here is 17-percent below the national average.”

Her hotel product is a thoughtful, functional one for people settling into the “river city by the sea” or business travelers. Homewood Suites has two-bedroom suites with kitchenettes; a daily free hot breakfast and happy hour; a patio with grills; complimentary laundry rooms; a fitness center; business center; and swimming pool in a leafy green setting.

“Jax – It’s Easier Here” is the area slogan. “It’s a little vague,” said Corrigan. “If you fly here, your rental car is steps away and you can be to the beach in 30 minutes. It’s so easy to get here and start relaxing quicky once you’re here.”