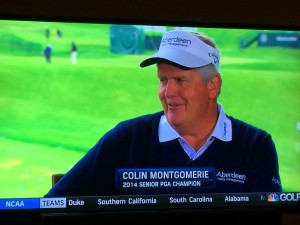 The 2015 season kicked off in January in Hawaii. Oops, I mean the 2014-15 tour season kicked off last October in Napa. I barely remembered that fact because it was so long ago. The wraparound season doesn’t feel right. In the old days (2013), having been golf-starved since the Tour Championship, I used to look forward to the Mercedes championship during the Christmas holiday (it’s called the Hyundai Tournament of Champions now) season. It’s also the kickoff of our fantasy golf season![1]

There are 52 events on the PGA Tour calendar. That’s not every weekend of the year because there are a couple of weekends where there are two events[2]. There are now only five weeks of the year without a PGA Tour event, two in November and two in December and one in January. This doesn’t even take into account the events televised for the European Tour, the Champions Tour, the LPGA or the Web.com Tour[3].

The PGA Tour announced the wrap around schedule a couple of years ago. They were trying to play catch up. Every professional sport league has expanded off season events to the point it seems they feel they have to be relevant every day of the calendar. Actually, they don’t. Professional sports are the worst kind of needy partner. They’re always around. They pop up in every restaurant and bar that you go. They constantly brag about themselves with “highlights” and “top ten plays” and “Twitter”. They fail to meet your expectations. They say, “It’s not you. It’s me.” Maybe these are my issues. Anyway.

The Major League Baseball season goes from mid-February when pitchers and catchers report to spring training through to late October. In this era of hyper-fit athletes does baseball spring training need to be a month and a half; call it fortnight and let’s do this thing! Baseball also has the “hot stove” league and while I love the imagery of early 20th century baseball purists gathering around a hot stove, drinking chicory, talking baseball and crop rotations, can’t MLB just leave us sports fans alone for a couple of months. There’s also the winter meetings which is now a “thing” and the World Baseball Classic which “isn’t”.

It doesn’t seem possible, but the NBA could have an even more annoying long season/off season. Preseason games start sometime early October, regular season starts around Halloween and flash forward 8 months and it’s lovely outside in June and you’re sitting through another interminable 7 game playoff series. Then comes the off season and weeks of 3-way trade rumors and free agent signings which, during one off season, resulted in a made-for-TV special called The Decision.[4] And due to byzantine rules that only competent NBA general managers understand, the rumors always have to include some chump who is overpaid and some other dude who sucks but has an expiring contract.

Except for the 4 week scam they call preseason football, the NFL season and playoffs are mercifully short. But then comes the Pro Bowl[5], the Combine and the NFL draft. Did ESPN extend the draft to a week yet? They could go two rounds a day with Boomer Berman providing the annoying nicknames[6] and Mel Kiper Jr. updating his draft board and hair.

The PGA Tour should a have a defined offseason while anticipation and storylines build for the new season. Start the first week of January and go every weekend through Labor Day. That gives us four months of off season when they can hold an event or two in smog-choked China and Q School for the golf hard-ons to blow off some steam. That’s it. Because you know what golf? Your fall season goes up against the NFL. And if you go up against the NFL, you’re going to get crushed. Everytime. Don’t feel bad, no one wins when they go up against the NFL: NASCAR, NBA, NHL, US Open Tennis, the baseball playoffs, college football. They avoid fall Sunday afternoons like my pitbull avoids baths. They schedule their events for any time but Sunday afternoon when a Bills-Dolphins game will out-rating any World Series game.

Instead of just taking a few month break, the PGA Tour schedules their Fall Season final rounds on Sunday afternoons. Enjoy getting mowed over much? Here’s a typical Sunday in September: On Sunday Sept 14 2014 the Chiefs-Broncos regular season game drew about 25 million viewers. The Tour Championship on the same day drew about 2 million viewers. Even the 2015 Pro Bowl had about 8 million no-life losers who tuned in.

And what should they do with the Fedex Cup? Is it not a complete failure? Ratings were down again this year. See the year over year declines in this table copied from Sports Media Watch website (don’t blame me if it’s not accurate):

Granted Billy Horschel (who won the Tour Championship over Jim Furyk in 2014) doesn’t really draw eyeballs but no one cares which millionaire golfer is going to win $10 million. Double digit declines from 2013, when mini-bulb Henrik Stenson won, is not a good sign for the Fedex Cup.

Here’s another suggestion for the PGA Tour calendar. Throw in a different format. Stroke play gets old. The Stableford scoring system is utilized for the Barracuda Open but that event goes up against the more prestigious Bridgestone so no one watches and the top players don’t play. And there is just one match play event and no team events other than the Ryder Cup and the President’s Cup every other year.

How about having a Ryder Cup style 2 man stroke play team event? Allow the players to pick their teammate and have an alternate shot day, a total score day and a best ball day on Sunday allowing the players to attempt risky shots under the most pressure. You could pick teammates at random on a made-for-TV event, or better yet, allow players to pick their own partners. You could see players paired for years abandon each other as injuries and losing streaks cause some players to seek out new partners. The pre-tournament drama, as Top 25 players jockey to pick up hot lower tier players or dump aging, previous year partners would be fascinating. And of course they could have a pairings announcement special. I love this idea.

So, c’mon PGA Tour, be more European and take a couple months off. Allow fans some time to miss golf. A wraparound season is not a season, it’s just a grind.

[1] Fantasy golf is so obscure that you feel like slightly less of a knob playing it than fantasy football. It’s like how the Furries feel about the Star Trek re-enactors.

[2] This year they’re holding The Barbasol Championship in Alabama the same weekend as The Open Championship at St Andrews. Come on PGA Tour, with all the hipsters who don’t shave, Barbasol needs a better slot than that.

[3] I have no idea what the site Web.com sells or provides. I’m guessing they sell discount price designer clothing or electronics. 30 seconds later: I was wrong. It’s like Go Daddy without the hot chicks.

[5] I didn’t think I would ever say this about anything but it is un-bettable.

[6] The best was Wally Absorbine Joyner and since this is a golf blog: Maurice Claret Jug.

Leave a Reply to Beetlejuice