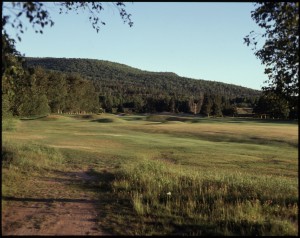 “Any golf course is nice when you’re on vacation,” Bob Vokey said, ruminating on a recent trip to the Maritime Provinces of Canada from his home in southern California.  “But when you come upon an assembly of courses like you find at Cape Breton, it’s really something special.  I hadn’t even planned to play golf on the trip, and didn’t have my clubs.  When I got a little taste of the courses there, I rented some clubs and headed out.”

Surrounded by the Atlantic Ocean and the Gulf of St. Lawrence and blessed with both pine-covered mountains and verdant valleys, Cape Breton is recognized as one of the most beautiful islands in the world.  In addition to its natural wonders, Cape Breton is celebrated for its rich Gaelic culture, historic villages … and, golf courses.  Dubbed the Fabulous Foursome by the island’s tourism interests, the courses include Bell Bay, Le Portage, Dundee and Highlands Links.  All four venues offer water vistas of the Bras d’Or Lakes or the Atlantic and rolling, heavily wooded terrain.  The Highlands Links goes one step further to offer a layout that’s considered by some to be Canada’s finest.

Highlands Links, designed by Stanley Thompson and opened in 1939, exists in part because of Thompson’s achievements in the province of Alberta a decade earlier.  There, on the behest of the Canadian National and Canadian Pacific Railroads respectively, Thompson delivered Jasper Park, and then Banff Springs.  Both courses were recognized as among the best in the world at the time, and are still highly regarded today.  The Canadian National Park Service recognized how successful these courses had been at attracting visitors to these remote though scenically splendid outposts, and imagined that adding golf to the assortment of outdoor activities already available on the island could do the same for Cape Breton—with the added benefit of providing employment for hundreds of men in the waning years of the depression.  A site was selected in Cape Breton National Park on the northern tip of the island, and Thompson, with his construction supervisor Geoffrey Cornish (who would later be renowned as a designer in his own right), set to work on what he would call his “mountains and ocean” course.  Construction on a grand hotel, the Keltic Lodge, was launched at the same time, insuring that visitors would have first-class accommodations before and after their golf.

Stanley Thompson was a master at exploiting the natural beauty of the fabulous sites that he was blessed to work with.  He routed holes with an eye toward exploiting available vistas, and his designs were often as grand as the land itself.  The site at Cape Breton had much to be exploited, and Thompson was up to the task.  “At Highlands, each hole has an individual perspective, and many have views of the sea” Bob said.  “There are no parallel fairways, as each hole is carved out of the forest.  It’s a wonderful affect.  Even walking between holes—and there are some long stretches between the green and tee—the views are spectacular.”  At Cape Breton, Thompson pulled off a crafty maneuver.  He created both a great seaside course and a great mountain course, without compromising the continuity of the overall schema.

Highlands Links begins out on a peninsula in the Atlantic, adjacent to the Keltic Lodge, and the first six holes play near the salt.  “Many modern courses begin with a few easier holes to warm up,” said Joe Robinson, Highlands’ pro for 33 years.  “That wasn’t Thompson’s plan.  Our two toughest par-4s hit you right out of the gate.  To make matters worse, you start out cold, as there’s no practice area at Highlands.”  The 445-yard 2nd hole, called Tam O’Shanter (because Thompson thought the green resembled the Scotsman’s hat), plays sharply downhill, with a broad playing area that exposes a bay and a wooded hillside.  The fairway is has many undulations, a common feature at Highlands.  “There was a lot of field stone in the area when Thompson was constructing the course,” Joe continued.  “Rather than carrying it off, he had the workers pile it in mounds on the fairways, and covered it with topsoil.  It’s hit and miss out there.  You might hit a great shot out there and have the ball take a bad bounce and end up with a terrible lie.”

The short 325-yard 4th is called Heich O’Fash (e.g., heap of trouble), and the knob of a green, guarded by traps whose shape mimics the hills in the background, demands a very precise pitch to cheat adversity on what would seem from its modest yardage to be an easy hole.  The seaside six reach their apex at the 537-yard par-5 6th hole, dubbed Mucklemouth Meg (named for a young lady who, as legend has it, could swallow a turkey egg whole).  The fairly generous fairway on this gentle dogleg right is guarded on the left by thick stands of trees and on the right by a pond.  Decisions must be made on the second shot; while a big hitter can potentially get to the green in two, the fairway tightens near the putting surface, bringing a series of bunkers on the left and deep rough on the right into play.

At hole number seven, the routing moves inland, into the valley formed by the Clyburn River, beginning with a 570-yard par-5.   “Number 7 is called Killiecrankie, which translates into ‘long narrow path’ from the Scots,” Joe Robinson explained.  “You stand on the tee, and it looks like you’re going down a bowling alley.  People take out a driver because of the distance, but you’re better keeping it in play with a long-iron.  It’s not a hole you can reach in two.  When you get to the green, the rolls and contours are something else.  You’ve only begun the hole when you begin putting.   Overall, I believe Highlands has as good a set of par-5s as you’ll find anywhere.”

The path remains inland through holes eight through twelve.  The Clyburn River flows along number twelve; during the fall, anglers cast to Atlantic salmon, some approaching 40 and 50 pounds, in a clear pool along this stretch.  After a teasing view of the ocean on number 13, you return to the coast in earnest on the 15th, a 540-yard par-5 called Tattie Bogle.  The name translates as “potato pits;” course notes explain that potatoes were once placed in hillocks and covered with a thatch.  The hillocks in this case speak to the wildly rolling fairway, which seems more prone to induce nausea than the seascape that lies beyond the green.  Whether you play your drive correctly off the hillside on the left of the fairway to catch the bounce you’ll need to get to this green in two, you’ll appreciate the prospect of Whale Island that frames the green on your approach.

Bob Vokey is widely considered golf’s wedge design guru.  Born in Quebec, he has followed a circuitous route, both geographically and on a career path, which now has him as director of wedge development with Acushnet, the multi-faceted company that includes the Titleist brand.  Golf clubs were always a hobby for Bob, whose dad was a tool-and-die maker; his interest in building golf clubs came from tinkering in his dad’s shop.  By the early 1970s, a hobby had developed into a small golf club shop in Anaheim, California.  Stints at TaylorMade and Founders Club followed before Bob landed with Titleist in 1997.  He is a fixture at many PGA Tour events, “working the trenches” on the range as professionals prepare nearby.  Bob’s wedges are favored by many PGA players and thousands of weekend players around the world.

Getting There:  Highlands Golf Links is situated in the town of Ingonish in the Cape Breton Highlands National Park, on the northern end of Cape Breton Island.  Air Canada (888-247-2262; www.aircanada.com) offers daily flights to Halifax, Nova Scotia from a number of North American cities, with connecting flights to Sydney, which is on the island.  Travelers can also reach Yarmouth, Nova Scotia via boat from Portland (800-845-4073; www.scotiaprince.com) or Bar Harbor (888-249-7245; www.catferry.com).  Train service from Halifax to Sydney is available from Via Rail (888 842-7245; www.viarail.com).  From Sydney, it’s another two hours by car, though the ride is considered one of the most scenic you’ll find anywhere.

Course Information:  Par-72 Highlands Golf Links plays 6,592 yards from the blues, and has a slope rating of 141.  Greens fees range from $72 to $93 (CAD), depending on the season.  You can reserve a tee time at 800-441-1118; more information is available at www.highlandslinksgolf.com.  Cape Breton is a popular golf destination, and many packages are available.  Information on Bell Bay, Dundee and Le Portage courses is available at www.golfcapebreton.com, or by calling 866-404-3224.

Accommodations:  The Keltic Lodge (800-565-0444; http://signatureresorts.com/resorts.asp?resort=1) was built to accommodate Highland Links golfers, and still sets a high standard for Cape Breton lodging.  Rooms begin at $119 (CAD) for two guests.  A number of excellent packages are available, including the Tee Off Package, which includes one night accommodation and green fees, from $104 (CAD) per person, based on double occupancy.   The lodge has several restaurants, and complete resort amenities.  Atlantic salmon fishing is available in a few rivers in the Highlands National Park, including the Clyburn River, which runs through the course.

From Fifty Places To Play Golf Before You Die.