At least that’s the way Tiger Woods is playing coming into the Masters. The greatness has morphed into a bunch of dull mediocre middle-of-the-pack showings. 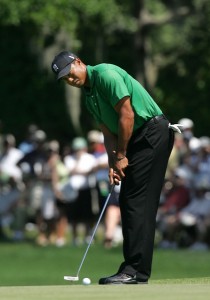 Shaky with the putter.

Gone is the swagger, the automatic putts from 5-feet, the bullet-like stingers off the tee, the red-shirt aura of invincibility on Sunday, and the notion that he’s a lock to break Jack Nicklaus’ record of 18 majors. He’s No. 7 in the world now and dropping with each passing week.

Will it all return? Or did all the magic simply disappear on that ill-fated Thanksgiving night in 2009?

Two-time U.S. Open winner Curtis Strange, who will handle analysis for ESPN, thinks we haven’t seen the last of Tiger.

Here’s my break down of the breakdown of Tiger:

Age and injuries: He’s 35, and it’s an old 35 when it comes to the amount of golf he’s played. The game has taken its toll. He has had four operations on his left knee and experienced problems with his Achilles tendon. Plus, he might be suffering from other ailments that haven’t been disclosed.

Also, Mr. Woods’ body has changed considerably. By bulking up, many experts fear he has lost the looseness that freed up his swing.

The golf swing is extremely delicate, and it doesn’t take much to throw it out of whack. A few subtle compensations for a bad knee, and suddenly the precision disappears. It’s happened to countless other players. It could be happening to Mr. Woods.

Too much tinkering: As everyone knows, Mr. Woods has moved on from working with Deerfield native Hank Haney to Sean Foley as his new swing coach. This marks his third swing change since winning the 1997 Masters under the guidance of Butch Harmon.

How many times can you change your swing in your career? Mr. Woods did win six majors with Mr. Haney.

Perhaps Mr. Woods went to the drawing board one too many times and is suffering from a case of paralysis by analysis.

Head case: When it came to mental toughness, I’d rank Mr. Woods right up there with Michael Jordan. Just like you knew Mr. Jordan would make the big basket, you always knew Mr. Woods would sink the big putt.

That isn’t the case anymore. Aside from his loose swing, Mr. Woods no longer is automatic with the putter.

There are plenty of reasons for putting problems. Usually confidence, or lack thereof, is near the top. Again, legendary players have lost their touch with the putter as they get older: Tom Watson comes to mind. It could be happening to Mr. Woods.

Edge gone: Speaking of the mental game, the intimidation factor that had been Mr. Woods’ biggest weapon now is gone. Players no longer fear him. Why should they? They now beat him with great regularity.

History, part 1: For those who say Mr. Woods won’t break Jack Nicklaus’ record of 18 majors, look no further than Mr. Watson and Arnold Palmer. The all-time greats combined to win 15 majors. Yet both won their last major at the age of 34.

Mr. Woods won his last major at the 2008 U.S. Open at the age of 33. Back then, you would be crazy to think that would be his last. But then, would you have placed a bet that the door would shut on Mr. Watson and Mr. Palmer when they were in the prime of their careers?

History, part 2: When people ask if Mr. Woods can become Mr. Woods again, I think of Lee Westwood and Steve Stricker. Both players saw their games completely disappear early in the last decade. Mr. Stricker even lost his PGA Tour card in 2006, and Mr. Westwood’s world ranking plummeted beyond the 200 mark.

Yet both players rebounded to eventually become No. 1 (Mr. Westwood) and No. 2 (Mr. Stricker) in the world. While each player is gifted and dedicated, they don’t have anywhere near the talent that Mr. Woods possesses. You would think if they could do it, he could do it.

Yes, it’s way too early to write off Mr. Woods. He has plenty of golf left in him, and this period could be merely a dip in a great career.

Still, if you want to throw away some money, bet on him to win the Masters. Despite his poor play, he’s still the favorite in Las Vegas. After all, he’s not just another guy.