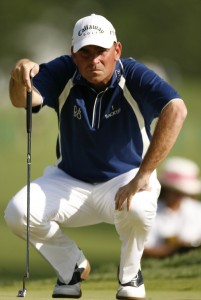 Remember when Thomas Bjorn’s career was left for dead just a few years ago? It supposedly ended with that disaster from the bunker at Royal St. George’s in 2003.

He went into a freefall, disappearing off everyone’s radar.

Well, take a look at who is the hottest player in the world. Thomas Bjorn.

The Great Dane won his second straight European Tour event Sunday by capturing the European Masters in Switzerland. All he did on Sunday was shoot a 62 to blow away a leaderboard that included Rory McIlroy and Martin Kaymer.

This comes on the heels of T-4 at the British Open in July.

Again, Bjorn’s comeback has to be good news for Tiger Woods. If Bjorn can bounce back from the depths, certainly Tiger can.

It may take a while for Woods to figure it out. But assuming his health lets him–a big if–I still think Tiger will get back to being a force.

If Tiger feels down, he should watch replays of Bjorn’s last couple tournaments. That’ll show him it can be done.