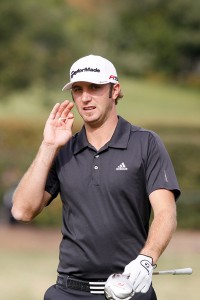 Bringing back the ever popular birdies and bogeys.

Birdie: Nick Whatney. Finally breaks through with a big victory. Is he ready to join the game’s elite?

Bogey: Dustin Johnson. It would have been good for golf if Johnson won Sunday. He might be a bit dull, but his game has a lot of appeal. Johnson has the potential star power to fill some of the vacuum left by Tiger Woods’ struggles. But he didn’t get it done Sunday.

Bogey: PGA Tour. I know the Tour wanted to take advantage of Daylight Savings Time, but didn’t it know that the final holes would be up against the NCAA selection show on CBS? Traditionally, that’s one of the highest-rated programs of the tournament. I’m betting plenty of sports viewers missed out on Whatney closing the deal.

Birdie: Tiger Woods. I suppose we’ll take any glimmer of hope for Woods. A 66 on Sunday to grab a suddenly rare top 10 has to be viewed as a positive. Now let’s see if he can do it for four rounds. Don’t forget he did hit some squirrely shots at Doral.

Bogey: Matt Kuchar. Mr. Top 10 struck again with a fifth-place showing. However, his 71 wasn’t nearly good enough to get him back to the winner’s circle again. Need to get some more wins, Matt.

Bogey: Luke Donald. It’s all about perspective. There’s nothing wrong with a tie for sixth. However, Donald needs to do better than a 72 on Sunday when he has a chance to win the tournament. The Match Play victory dulls the pressure a bit, but I know he also wants to win a stroke-play tournament too.

Birdie: Adam Scott. Again, it’s about expectations. A sixth-place finish for the struggling Aussie should have him feeling better.

Bogey: Phil Mickelson. Unlike Woods, Mickelson walked away discouraged Sunday. He shot a 76 to drop to 55th. He needs to start building some momentum for the Masters.

Birdie. Fast play. Our favorite stat of the week came from Anthony Kim and Jeff Overton. Paired together, they played the final round in 2 hours and 6 minutes. Wow. If only everyone could play that fast.

Kevin Streelman: Tied for 15th, his best finish of the year.

Todd Hamilton: Tied for 42d in the Puerto Rico tournament.