After many hours of travel from many compass points the Golf Road Warriors met this morning at Dublin airport, threw all manner of baggage into a seven-person VW van and hit the road north– WAAAY north, four hours in the car to Ballyliffin Golf Links, at the very top of the island.  While rain fell in Dublin the skies cleaved open as we headed for golf.  A quick stop in a local mini-mart revealed what the locals are snacking on, something I explore in every country I visit.  You can tell a lot about a culture from their candy and ice cream.
Hal Phillips nobly and skillfully piloted the van (at least for the first 3:45 of the four hour trip), though jet lag seemed to effect him as we got closer to our destination– and his driving definitely effected Peter Kessler as he turned a whiter shade of pale in the back seat.
We arrived at Ballyliffin just before our four o clock tee time on a cool, overcast, beautifully evocative afternoon, and following a warm reception by GM John Farren and an introduction to our caddie, Ryan, headed for the first tee.  Shaky.  Not having slept, cramped on planes and in the van for the past day and a half.  But the salt air of the links revived us and while we all agreed to destroy the video of our opening tee shots, walking that first fairway loosened and lightened us.  Giddiness ensued, as we swirled through the jet lag like Bill Murray in Lost In Translation.
We played the course from about 6300 yards in a brisk two-club wind in sun and clouds, smoked a Monte Cristo #4 on the back side for a little extra lift. 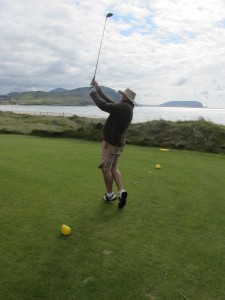 We spent some time in the gorse and some in the sand but there was pure joy in playing this remote and pure links with its hard, firm, fast turf, large rolling greens, and sublime strategic challenges.  Fairway ripples left a wide variety of shot demands off different lies.

Day one of this ten-day trip and already one of us has misplaced about 150 Euro (okay, it was me), someone else broke a piece off the van, inside of which looks like a plane wreck with stuff everywhere, and it’s after midnight and the four of us are in the lobby of the Ballyliffin Hotel (where we had a great pub dinner) trying to coordinate our technologies and download the video we shot today and post these stories under severe sleep deprivation and some technical difficulties.

Tomorrow begins back at Ballyliffin’s Glashedy course for a morning round followed by the usual winding drive of several hours to reach our afternoon tee time at Rosapenna.  With some luck, technical difficulties will be solved by tomorrow and we’ll deliver some more video and photographs, I’ll beat Peter Kessler to tie our life-long on-going match, which he won on eighteen today despite a heroic rescue club hit out of the second cut that got to fifteen feet.

Better get some sleep before I lose something else . . .