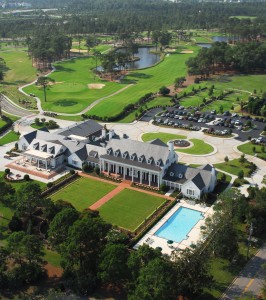 Today the Golf Road Warriors moved off Bermuda grass and onto beloved paspalum– a newer grass that can be irrigated with brackish water– and my score went from 96 to 79.  Paspalum lacks the grain and the fluffy ball- swallowing misanthropy of Bermuda.  Any connection between score and grass type?  You decide.  The paspalum is a new addition (added during a 2009 renovation that also led to the creation of two entirely new holes) to the oldest golf course in Myrtle Beach– Pine Lakes, designed by Robert White (the first president of the PGA) and opened in 1927.  This public access course not only provides the upscale experience of a toney private club– it let’s you feel like you belong to a club that was founded in 1927, where you can retire to the original antebellum clubhouse for  a terrific lunch, which may include the clam chowder that the club used to ladle out on the tenth tee during the winter months (during the summer months they poured Mimosas for their discriminating guests, who often included Rockefellers and Vanderbilts.  Nearby you can also walk through gorgeously appointed room full of memorabilia and visit the Myrtle Beach Golf Hall of Fame.

While the property overall exudess a subtle southern charm as warm as bourbon, the golf course itself offers a fair, fun, walkable excursion through classic golf architecture.  The short opening hole of 343 yards asks for a straight tee shot aimed at bunkers fronting the green.  Number four– one of the new holes– provides a fun, short dogleg with fairway moundings helping to lend a pleasing shape to the terrain and a view that is pure Myrtle Beach: hit your approach to a mostly flat, ovoid green with a huge sign in the trees behind it for a surf shop.  It’s a pleasant reminder that beyond the pines the ocean rolls up on the shore and the shore is lined in certain places with gorgeous upscale condos like the one we’re inhabiting at North Beach Plantation, and in other places is lined with a boardwalk full of tee shirt shops, amusement parks, skee ball, and ice cream.  And it’s all brushed by the healthy sea air.

Five is also a new hole and also a dogleg left, this time around a wetland.  The short par five is guarded by bunkers in front of the green meant to intimidate you into laying up, and so of course I pulled three -wood from the bag and rolled it right into the sand.  Number nine again requests a draw off the tee but not enough of one to reach water on the left side. 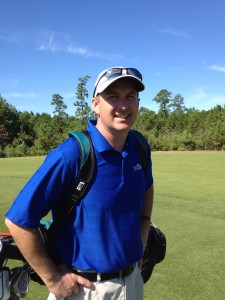 Steve Mays, who spent much of the day on the beach.

The back nine opens with a long par five of 554 yards– an aesthetically attractive excursion followed by a par three over water with a false front to the green that repels uncommitted shots.  Thirteen serves up a semi-Cape hole that bends to the right, though you shouldn’t really even try to carry any of the lake that it bends around, instead hitting long and left for a good shot at a green framed by enormous bunkers that it was fun watching playing partner Steve Mays try to hit out of.  Mays, the VP of Sales and Marketing for National Golf Management, which owns Pine Lakes, was the Houdini of bunkers today, escaping from a large collection of them.  Eventually. 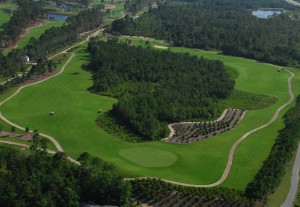 Moving ahead, fourteen was one of my own favorites of the day, a long par four with a lake in the middle of the fairway but hidden from view by the slope of the land.  Pines lining both sides create a shady idyll and the hole climbs past the water back up to an elevated green.  I can barely remember the additional joys of the back nine because suddenly I was playing out of my head making pars and birdies and much of those holes are a blur in retrospect.  After carding a 44 on the front side at least because I just couldn’t get myself to hit my putts hard enough to reach the hole (and partly because I hit several atrocious shots and started the round with two double bogeys) I shot an even par 35 on the back, getting into the seventies for only the fifth or sixth time in my career.  Which is to say: I LOVE PINE LAKES!