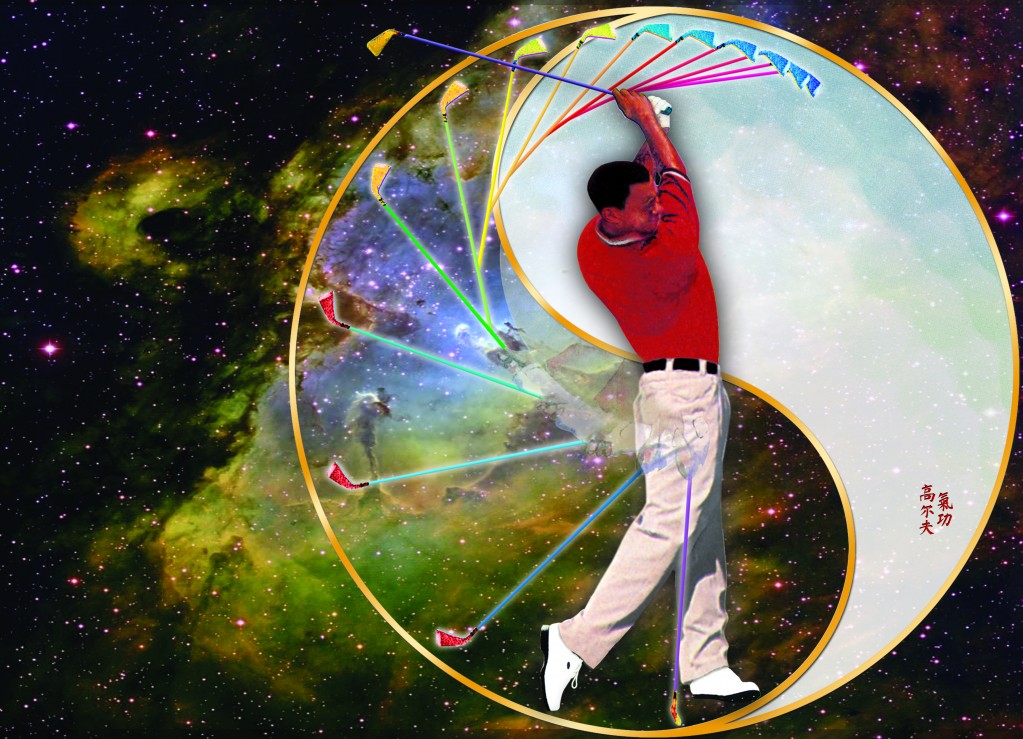 “When I think back about the countless times I’ve watched Tiger, at close quarters,

hitting a previously inconceivable shot, with an unfeasible club,

from an indescribable stance, out of an unplayable lie,

to within a few feet of an unattainable flag,

it strikes me that I may not have

of describing the scene.”

Over the past few months many have wondered if Tiger’s best days are behind him. While esteemed television commentators, analysts, and teachers use cutting edge technology to pinpoint the physical flaws in Tiger’s swing and offer sage solutions, media pundits point to his personal life and suggest that once his emotional and mental turmoil abates then Tiger will return to form, hit it straight, and dominate. Still others cast doubts due to the cumulative effects of Tiger’s injuries, surgeries, and age.

Not me. I am sure it’s only a matter of time before Tiger’s golf swing and striking skills come back into form. He will quickly recover his emotional and mental balance as his personal life evens out. And as he regains the time he needs for practice his consistency will improve. But, I suspect that Tiger’s Mojo — his ability to freely traverse the Zone, sustain exalted play, make spectacular shots in the heat of battle, get all the lucky bounces and breaks, and hole key putts at crucial moments in order to win — will not be restored any time soon. This 7-part series explores why.

Its been said that the long game (driver & fairway woods) mirrors physical balance, iron play reflects emotional harmony, the short game displays mental poise, and putting reveals spiritual alignment. But there is a fifth dimension in golf, the energetic. This fifth dimension includes the invisible energy the Chinese call Qi; the invisible human energy body/grid that interpenetrates the physical body through which our Qi circulates; a super-vibratory realm (the Zone) we access through our energy body/grid; and the extraordinary untapped energetic abilities, Mojo, asleep within it.

It’s really Tiger’s Mojo that sets him apart from all others, and puts him in a class by himself. Without his Mojo, he’s stripped of his most potent weapons. Without his energetic & spiritual edge, he plays and putts as a mere mortal. But before we explore how Tiger can get his Mojo back, and how to activate your Qi, play the Zone, and get your own golf mojo working, I need to provide some background to put this all into context. The following narrative relates key experiences that shaped my view of golf. We begin at square one, the day I first met Earl and Tiger Woods.

“And then Tiger came along and put everything into Hyper-Space.”

I first met Earl and Tiger in 1991 at the Arizona State University golf course in Tempe, Arizona. The first time we spoke Tiger was on the range hitting 9-irons toward a green 150 yards away. I approached slowly so as not to disturb him. Nonetheless, he gave me such a potent stare that I instinctively clutched my solar plexus and drew back. For a moment he was every inch a tiger. And a hungry one. Like a large feline, he carefully eyed, as if he couldn’t decide whether to toy with me, pounce and kill, or let me go. This was very disconcerting coming from 14 year old.

When I asked permission to video his swing he instantly morphed back into a playful kid. With a sly smile he nodded ‘Yes’. After watching a few minutes I thought to myself: “Well, he’s got great form and a very smooth swing, but I really don’t understand what’s the big deal. He’s so inconsistent. Why, he can’t even hit two straight shots in a row.” Tiger first hit a high fade, a high draw, then, a high shot straight. Then, he hit a low draw, a low fade, a straight knock down shot followed by an extremely low straight shot about chest high that ricocheted off his clubface like a bullet. I said to myself: “He skulled that one…”

Although all of his shots ended up within 15-feet of the flag, I wasn’t too impressed. Tiger switched to an 8-iron and hit the same seven shots without discernibly changing his swing. All the shots again ended up within a 15- foot radius of the flag. He hit this same sequence with a 7-iron, then a 6. Tiger’s shot trajectory and flight path stayed the same and nearly all the balls were clustered around the flag 150 yards away. His swing looked effortless and he demonstrated superb control. As Tiger worked down through his set, at one point his ball flight formed a gentle S – drawing and fading in the same shot. A mirage? I couldn’t believe my eyes. Tiger finished in a flourish launching 1-irons 300+ yards.

On the first hole, Earl said: “At this stage of development, Tiger is experiencing growth-spurts. His muscles and tendons are too elastic so he’s having difficulty controlling distance, especially with his short irons. Sometimes he hits his irons 20 or 30 yards farther than usual.” And moments later – seemingly on cue – Tiger hit his approach over the green. After a tough downhill chip and missed putt, Tiger began his round with, bogey. Leaving the green he growled, “Damn it Tiger!” under his breath.

The 2nd hole at A.S.U. was a straight 323-yard par-4, and directly into the wind. With the pin at the rear of a long green, it was a 350+ yard hole. I moved to position directly behind the tee as Tiger prepared to hit. Tiger addressed the ball, and began to focus and gather his energy. Just before takeaway, Tiger’s concentration became so intense the air seemed to electrify making my skin tingle. Tiger somehow seemed to grow larger, as if he was enveloped in a force-field. Then, he shifted gears becoming perfectly still, like a stalking tiger prepared to leap. His back swing was smooth, relaxed, elegantly stretched, and unhurried. With his legs taut and his lower body firmly anchored, Tiger coiled his shoulders up to the peal, with his hands held high. He paused momentarily, shifted his weight, then brought the club down in a blur…

The golf ball exploded off his clubface and leaped into the sky. It accelerated and rose so quickly, had I not stood directly behind him it would have been impossible track its flight. Tiger’s ball — suddenly 250 yards from the tee — seemed to be suspended in the sky. Then, it appeared to hyper-accelerate, leap forward, and disappear.  His ball — a brilliant white dot against a deep turquoise blue Arizona sky — completely vanished: like the special effect of a star-ship jumping into Hyper-Space.

As Tiger and his playing partners walked the fairway towards their tee shots, Earl and I kept pace on the cart path adjacent to it. Tiger’s playing companions came to their drives about 275 yards from the tee. But Tiger kept marched gracefully, powerfully, down the center of the fairway, as Earl observed: “An African prince surveying his domain.” The A.S.U. stadium design features elevated walkways for excellent spectator viewing. From above the fairway, we still couldn’t see where Tiger’s drive had come to rest. We walked 280, 290, then 300 yards from the tee with no sight of Tiger’s drive. As we approached the green, we finally saw his ball one foot past the hole. He nearly holed his tee shot, 320+ yards into a stiff wind! After an easy tap-in eagle, Tiger was now one-under par.

I was in a state of shock. Tiger had nearly aced a par-4, which was what he had intended to do. But Earl was nonchalant. He’d seen it before. When I asked how Tiger did it, Earl remarked: “Peter, what you’ve got to understand is that Tiger has an extra gear in his golf swing. It’s a kind of Hyper-Drive for extra distance. Tiger has the Inner Swing.”

Watching Tiger launch 350-yard drives took my breath away. His shots would leap into the sky, vanish from sight, then, re-appear, as if by magic, nestled close to the flag. Tiger turned the par-5’s into par-4’s and short par-4’s into par-3’s.

I walked with Earl for much of the round, talking intermittently. After Tiger birdied 18 for a 69, he stopped and spoke. He seemed disappointed after turning a potential 64 into an average 69. I said to Tiger: “I’ve traveled the world to far distant places, walked the high mountains, and seen some amazing things. But you, Tiger Woods, are the most amazing thing I’ve ever seen.” Tiger chuckled, as I quickly apologized for referring to him a ‘thing’. When I asked Earl’s permission to write an article about Tiger’s play, he paused and asked what I intended to call it? I said: “After what I’ve seen today, Tiger Woods and Hyper-Space”. Then, he and Tiger signed the scorecard I’d used to take notes. 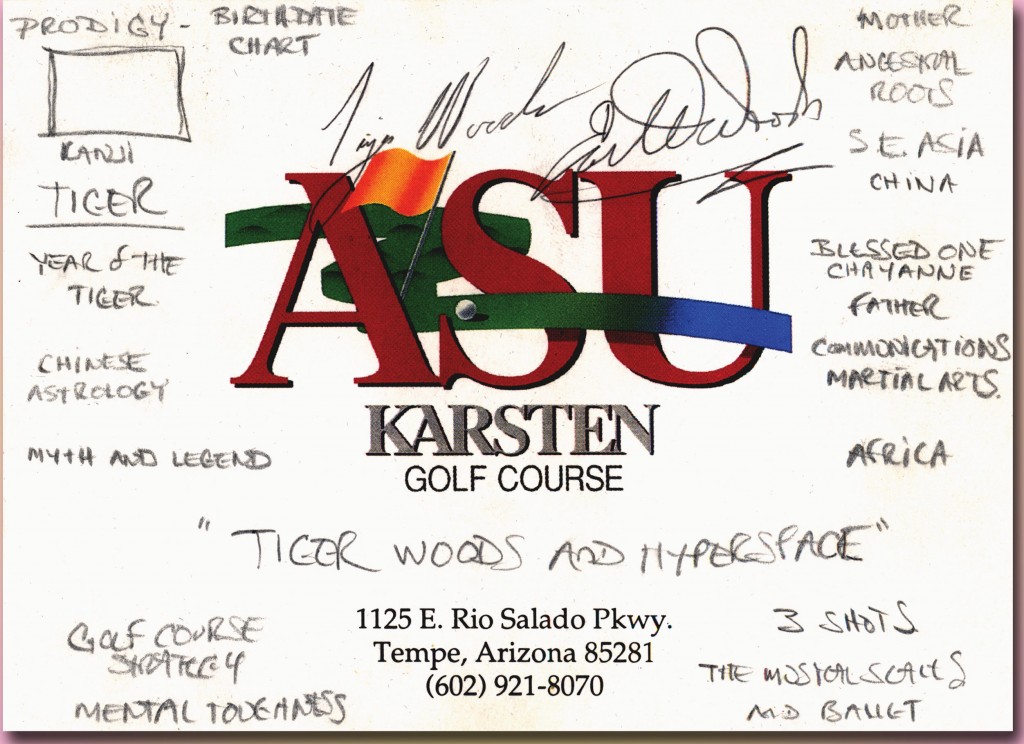 As Earl and Tiger departed at sunset, the course and mountains to the East were bathed in shimmering gold. High above, a jet’s vapor trail was brilliantly illuminated… just like Tiger, scaling the heights above and beyond. After sunset, the sky turned deep purple. Passing clouds reflected colors of such beauty as to defy description. I sat on a hill and gazed into the heavens, until the colors faded away and the first stars appeared.