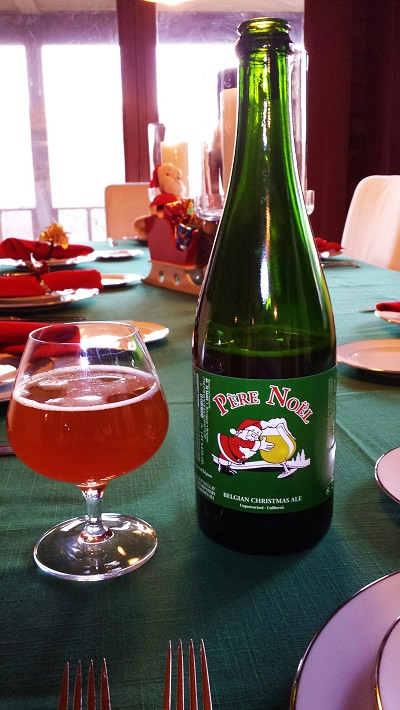 Well, it’s been a busy Christmas Day, unfolding in a traditional and perhaps even necessary state of sleep-deprivation. But it did make it tough to pay close attention as we cracked open the De Ranke Père Nöel before dinner.

I know it was a fine apéritif, and even went well with our Italian-oriented Christmas meal, perhaps because of its peppery quality or the addition of licorice to the brewing mix. The beer isn’t overly sweet, has a distinct hop bite (Brewer’s Gold and Hallertau, I’m told), a moderate mouthfeel that seemed to thin out a bit toward the end, but which was overall very drinkable.

It was also a beer I had to get. I’ve had an alter ego as Christmas Father ever since 2007, when some giggling young girls, caddies at the massive Mission Hills Golf Club in Shenzhen, China, admitted what had amused them. One of them said I looked like Santa Claus, or as they put it in their halting but charming English as they pointed shyly at me, “Christmas Father, Christmas Father.” 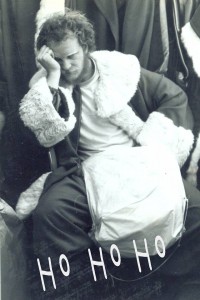 Santa of yore on a break

Well, I thought it was kind of cute, although it later occurred to me that it must have meant they thought I looked like a fat, white-bearded old man, if relatively benign. Actually I had some bona fides as a department store Santa many long years ago, when I was neither fat nor white-bearded, though I could hope I was then benign.

In any case, among my golf-writing confreres, at any rate, the moniker stuck to the degree that at a few golf writer tournaments I played in someone had me introduced as Christmas Father. So the Père Nöel was a natural. It comes wrapped in appropriate green tissue, and is a lovely amber in the glass.

I did pass it around to some of the now-complete family assemblage before dinner, and this was instructive. My daughter-in-law said, “It’s not bad,” which is certainly a better review she gave the Jolly Pumpkin Noel de Calabaza three years ago when she said, “It smells like piss.”

My youngest granddaughter, Lilah, said, “It’s bad. But I’ve had worse,” and she reminded me of Petrus Winter #9 Ale from last year, which she characterized as tasting like “cinnamon and barf.”

My son actually liked it, so I consider that De Ranke has made it through the gauntlet of some pretty fierce critics. And I know I’d like to pick up another bottle. 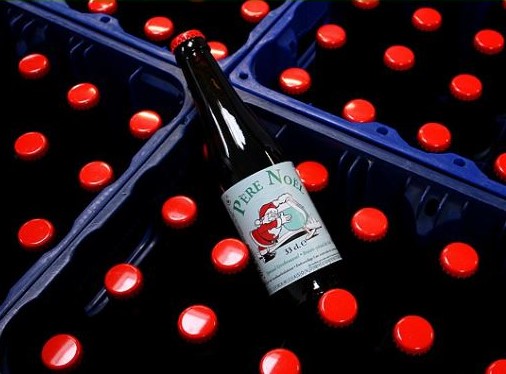 De Ranke grew out of the smaller Brewery Nino Bacelle, founded in 1994 by Nino Bacelle, who actually brewed his beers at Brewery Deca in Woesten. By 1996 he had met brewer Guido Devos, and they threw their lot in together as De Ranke. Ever since the pair has brewed some fairly hop-forward beers, at least for Belgium, particularly their best-selling XX Bitter, which is said to be one of the most bitter ales in the country.

De Ranke has had its own brewery in Dottignies since 2005. More than 50% of its production is for export; in the U.S. eight of the beers are brought in by the Shelton Brothers. The Père Nöel is in a 750ml bottle with a “Best Before” date five years from bottling. Meaning mine was bottled in September of 2013 and could have aged for three more years. Fat, white-bearded chance of that. 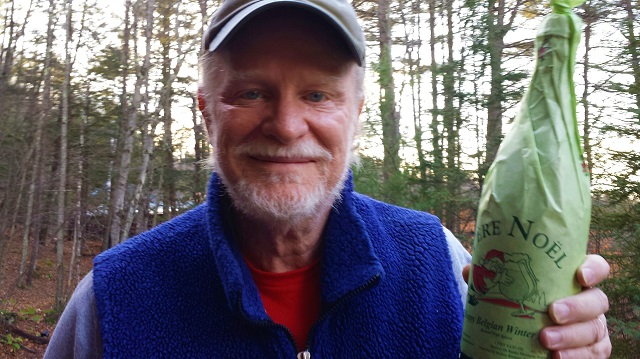