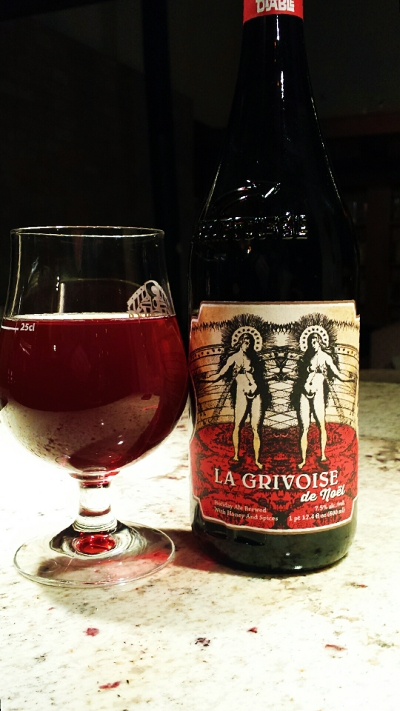 After our last, devout, Trappist brew, the heavens delivered an overnight coating of snow that kept me off the roads most of the day, and the cupboard empty of a suitable brew.

The devil you say? Well, might as well follow up with a beer from a Quebec brewery (Le Trou Du Diable) that roughly translates as The Devil’s Hole, and the brew (La Grivoise De Noël) as Naughty Noel, or Christmas Joke, or something like that. (Translations from Quebecois welcome.)

Le Trou Du Diable brewery and brewpub is in Shawinigan, a city of about 50,000 on the Saint-Maurice River in the Mauricie area of Quebec. It’s roughly a two-hour drive north from Montreal or a little less east to Quebec City.

I know little about the brewery other than it’s supposed to be a lively place, with brewery, brewpub, clothing store and event venue all on hand. It’s been brewing for ten years, and has a sheaf of awards to show for it. This is the first of their beers I’ve had as far as I know, and it’s a good one.

A light brown, slightly hazy brew, it’s not unlike our Day 2 beer, the Great Lakes Christmas Ale, in that it’s made with honey and spices. It is unlike it in that the La Grivoise De Noel is sweeter, with an aroma of jellied candies, and a more treacly taste and coating mouthfeel, though curiously lacking in body. The spices are muted, and there’s a light peppery finish.

It didn’t blow me away, but I liked it. I wouldn’t turn another bottle down if it happened by. And if I ever happen by Shawinigan, I’ll be sure to drop into Le Trou Du Diable. That’s Le Trou Du Diable the brewery, and not Le Trou Du Diable the swirling eddy at the base of the Shawinigan Falls in the Saint-Maurice River. That wouldn’t be good, since as legend has it, Le Trou du Diable has no bottom, making it impossible for anyone who falls into it to be rescued.

Stick with the beer, on solid ground. 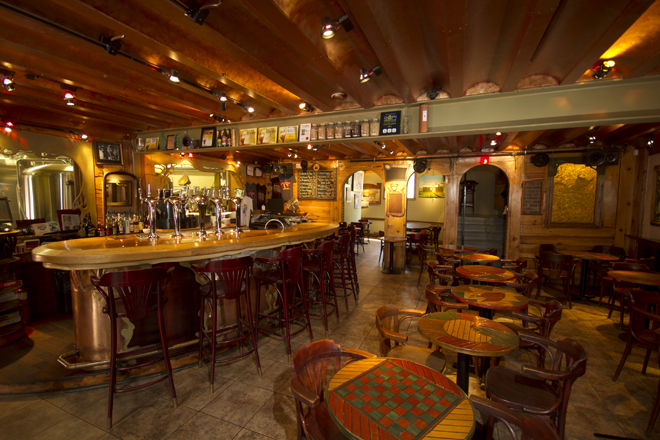