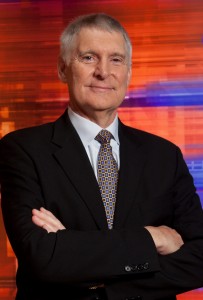 Andy North joined ESPN as an on-course golf reporter in September of 1992. He serves as both an analyst and a reporter in ESPN’s championship golf coverage as well as analyst for ESPN’s preview shows and SportsCenter

North brings to ESPN the experience of winning two U.S. Open championships (1978 at Cherry Hills in Denver, Co. and 1985 at Oakland Hills in Birmingham, Mi.).

He turned professional in 1972 after graduating with a Bachelor of Science degree in marketing and finance from the University of Florida, where he was a three-time All-America. North also played in the Ryder Cup (1985) and the World Cup (1978) events, and won the PGA Tour’s 1977 Westchester Classic. He played fulltime on the PGA Tour until 1992 when various injuries limited his participation and he moved into a TV role. He still occasionally plays on the Champions Tour, which he joined in 2000.

North, a native of Thorpe, Wi., is an avid follower of University of Wisconsin sports. Before turning pro, he won the 1969 Wisconsin Amateur and the 1971 Western Amateur.

North is well-known in his home state for his charity work. His annual Andy North and Friends Golf Classic, which attracts professional athletes from many sports, raises funds for the cancer center at the University of Wisconsin.

JT: How has the transition gone from playing on Tour to the booth?

AN:I’m enjoying my life now. I’m talking about a game that I played and have followed for a long time. I have had a great time doing television and I’ve been lucky and done a lot of things since joining ESPN 20 years ago.

JT: Did you think when you started out that you would have the longevity as an analyst that you have enjoyed?

AN: It’s hard to believe it’s my 20th year. And I still don’t have a clue what I’m doing (he says with a laugh). I have worked with some great people and I’m deeply involved in a game I care so much about. I have a lot of friends still in the game and it’s nice to be a part of it.

JT: You are one of the more respected people in the game. How has that affected your life?

AN:I’ve had the opportunity to do some real neat things. For instance, this year Jack Nicklaus asked me to be a member of the Captains Club at the Memorial tournament that helps pick honorees and sponsor exemptions. That was quite an honor. I believe that at this point in my life, having played the game, been involved in broadcasting and designing and building golf courses, I have a feel of what is going on with golf and where it is heading.

JT: What’s been the best thing about your job, both playing professionally and broadcasting?

AN:Well,  it hasn’t been boring. For the last 30 years, I have gotten up and done different things every day. I have been able to raise a great family and have had some wonderful business opportunities open up for me. Most of my best friends I met through golf.

JT: How did you get into broadcasting?

AN:ESPN asked me if I would be interested at end of 1991 and I tuned them down. But I had to have another operation, go through rehab and see if I could still play. I thought about it and said that I would give broadcasting a try during that time. The worst case scenario was that I would go back to playing after rehabbing. I jumped into broadcasting fulltime in 1992 and really found that I enjoyed it and stayed with it.

JT: What broadcasters did you admire when you started out in the business?

AN:They did different sports but I liked Hubie Brown and John Madden. I taped some of their stuff and looked at it and asked myself why I liked these guys. They weren’t yelling at me but setting up situations that the viewer could then watch and see what happened. They were telling me something I didn’t know, usually setting up situations and what might or might not happen. That’s what I try to do today, set up scenarios and prepare the viewer. I spend a lot of time talking with guys and walking the course. Most people watching on television want to play better. I try and relate to the viewer what good players are doing so that people at home can understand it and maybe translate it to their games.

JT: Are their guys in the booth today that you admire or dislike?

AN:Well, I think some people talk too much. I love guys that tell me something. I think Trent Dilfer was one of the best hires ESPN has ever made. Kirk Herbstreit is another one who knows his stuff and works hard at it. Tom Rinaldi is someone who I admire for his reporting and writing skills. Guys like (Mike) Tirico, (Chris) Berman and (Scott) Van Pelt all do phenomenal jobs.

JT: How has your approach to broadcasting changed in 20 years?

AN: I’m way more comfortable now. I realize I don’t have to be perfect. My oldest daughter is a teacher and she will call to tell me when I make a mistake. She says, `Dad, you just made up- another word.’”

JT: Do you miss playing competitively?

AN: Yes. I didn’t really like all the stuff leading up the tournaments, practice and travel, but I loved Thursday through Sunday. Even now, I try and play as well as I can on those times when I get out. (Tom) Watson and I play in the Legends every year and it’s a blast.

JT: You are good friends with Watson and followed him in the last group when he almost won the British Open two years ago. What was that like?

AN: I think I felt worse than Tom did. It was one of the hardest things I ever had to go through on a golf course. I wanted Tom to win it so bad.

JT: You won two U.S. Opens but only one other PGA Tour title. Would you trade one of both of those Open titles for 10 or 15 other wins?

GM: No way. I’m remembered as a guy who was good enough to win two U.S. Opens and that is fine with me. When I was a kid I would be putting and I had three balls that I was playing. One was for Arnold Palmer, another for Jack Nicklaus and the other was mine and I would be putting to beat those guys to win the U.S. Open. That tournament was always the most special to me.

JT: What do you think of the young guns on Tour?

AN:I think Rory McIlroy is the real deal. Dustin Johnson has the tools to be a great. Jason Day is very good. Some of the others I wonder about. I’m not a big fan of all the swing coaches and mental gurus these kids have. Kids specialize now, and mom and dad drive them everywhere. They get out in a tournament as adults and they can’t think for themselves. We had guys like Watson, Hale Irwin, Nicklaus who were great athletes in other sports and were also great golfers. I think they learned through competition in other sports how to be tough on a golf course. I don’t know if that’s there today.

JT: OK, the Tiger question. What do you think?

AN:Tiger will be okay. I’m liking the things I’m hearing from him. This is the first time he actually said he’s not going to play until he’s healthy. I may be in the minority but I wouldn’t be surprised, if he is healthy, that he wins two or three tournaments at the end of the year. Listen, his toughness and talent haven’t gone away. One good week and watch out.

JT: What is your favorite event to cover?

AN: I love the Majors. But honestly, I like events like the long drive championship and skins games. They are fun and different and I have fun covering them.