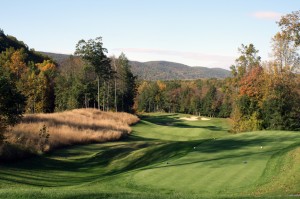 View from the tee at the ninth hole at Golf Club at River Oaks. Photo by Mark Eucalitto

It has always hit me as quite remarkable that two of the best new courses built in New England during the past decade are located about a five minutes crow’s flight from one another, Bulls Bridge Golf Club in Kent and The Golf Club at River Oaks on the Sherman/New Milford town line in western Connecticut.

I had the opportunity to play both of these private gems this year and it is difficult for me to choose which one I prefer. It’s kind of like deciding between chocolate chip or chocolate swirl ice cream. I mean, they both taste great. If I were to compare I would say there are more spectacular holes at Bulls Bridge, especially, one, two and 12, with the first tee maybe the most dramatic view on a golf course in Connecticut. While River Oaks may not have the visual wow factor of its competitor up the road, the routing is just as good and unique in that a number of the track’s holes on the back nine hug the Housatonic River, which was visible through the shedding trees when we played this week. And the look from the tee box on the ninth hole reminds one of playing golf in northern New England rather than  Connecticut.

There are differences between the two in ways other than their routings. Bulls Bridge is a golf club, pure and simple, while River Oaks is more of a country club, with tennis courts and a pool and a huge dining facility. There are also homes (several quite stunning) near the course at River Oaks, while Bull’s Bridge is unto itself. But the real reason people join these clubs is for the golf and it’s great at both venues.

Ralph Salito is the new head pro, director of golf, teaching pro and several other titles at River Oaks, joining the club earlier this year after a long and stellar stint at Richter Park Golf Course in Danbury, Ct., ranked annually as one of the better municipal courses in the United States. Ralph is an accomplish player, having won a number of prestigious tournaments and he can still can move the ball around the course with skill and success.

We got to play River Oaks on perhaps an ideal autumn afternoon, temperatures around 60, a bright sun and no wind, which only enhanced the experience. Robert McNeil designed the course that opened in 2003 and he built into it challenge and fairness. The fairways are rather generous on the par-fives and longer par-fours and tighter and strewn with fairway bunkers on several of the shorter par-fours. The greens are fairly large and kept on the fast side, although this time of year the grass grows a little thicker and slows the roll of the ball down.

While the course is no push-over it is eminently playable for guys like us, 8 to 10 handicappers, as long as you play the proper set of tees, which for us on this day were the whites, measuring around 6,100 yards. The tips play 6,730 yards with a slope of 138 and a course rating of 73.8. The layout  plays to a par of 70 and has five par-threes, which cuts into the overall length, so don’t be fooled into thinking 6,100 yards is easy. It’s not, even for the best players.

Perhaps the best hole on the front side is the 435-yard (back tees) par -four ninth, which starts from a dramatically elevated tee box and affords a spectacular view of the fairway below and the hills in the distance. The second shot is across a natural area with a huge bunker guarding the right side of the putting surface. I made par and it felt like birdie.

Number 12 is a real nice short par-four that plays about 300 yards. But the drive must be pure to avoid several large fairway bunkers, and the second shot is to a green that is hidden from sight on the fairway.

The finishing holes are all very good, which adds to the satisfaction of playing the course. A well-designed golf course should always reach a climatic ending in style and River Oaks does that. After a nice par-three in the woods at 15 there’s a short par-five (503 from the tips) that can be reached in two by the big hitters, and then comes the course’s signature hole in my estimation, the 210-yard par-three 17th that plays across a pond to a narrow green. The 18th is solid, a double dogleg par-five that demands a lusty drive, a well-placed layup and a short iron into a large green that is protected by  bunkers.

All in all, River Oaks is as good a golf course as you will find in the state. If you ever get the chance, do yourself a favor and test out this beauty. Check out www.clubriveroaks.com.