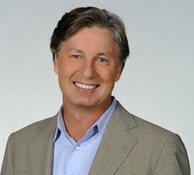 After a 15-year PGA Tour career that included more than $4 million in earnings, Brandel Chamblee made a full-time transition to the broadcast booth in 2004. Currently, Chamblee serves as lead analyst for the Golf Channel’s network’s PGA Tour coverage and also as a studio analyst for Golf Central, Golf Central Pre Game and the network’s Live From telecasts during majors weeks. A three-time All-American at the University of Texas, his career highlights include victories at the 1998 Greater Vancouver Open on the PGA Tour and the Ben Hogan New England Classic on the Nationwide Tour in 1990. He finished within the top 100 on the PGA Tour money list seven consecutive years.

How did you get into broadcasting?

As a rookie on tour in 1988, I was asked to write a column for Golf World along with Gary Van Sickle. Some TV execs liked the work and asked me if I would be interested in doing some TV. Nobody, does “some” TV, once you’re in, you’re all in, and I’ve been all in since 2004.
Was it something you always wanted to do as a player?

I never thought about TV as a career until I was asked if I would consider doing it in the late 90’s and it took a few years to germinate. But yes, once I got the idea in my head and a few shows under my belt the rush to “get it right” is consuming.
How does being a player help you as a broadcaster?

My experiences give me the direction I need to search for answers and try to shed some light on and bring more value to what the audience is watching.
Is it difficult to approach players for interviews having been “one of them” in the past?

No, but sometimes in the course of my job as an analyst I have to criticize players and that makes interviewing them more difficult sometimes. It comes with the job.

Do you feel today’s players respect you and the job you do?

I hope so. It is always my goal to look for things that interest me as a golfer and form opinions based upon my observations and research, and then to talk about them with the passion I feel for the game.
Do you still get to play some?

Yes, I still play, but it is not my priority. I have three children and when I am not working my time is theirs. When I do play, I play all over Scottsdale, Az., which has a dizzying array of courses and once a year I take a golf trip with a few guys.

Do you miss competing on Tour?

I do miss competing and the camaraderie of the players. But when I start getting ready to play in an event I am reminded of all that goes into competing; the grinding and ceaseless battle to sharpen all aspects of one’s game is all consuming and I am consumed with other thoughts.

What do you feel your strengths are as a broadcaster?

My preparation. I made it a goal, years ago, to approach each show in the same way and archeologist looks at a pile of dirt, I dig.

What is your favorite event to cover?

The next one. As they say you are only as good as your last show and they are all a challenge.

How do you feel about the state of golf, both the pro tours and at the grassroots level?

Golf is too expensive and time consuming. Courses should not have any rough to speak of and very few bunkers or big water hazards. The joy of golf should be in the beauty of being outdoors and in the fun a flailing away without too much worry as to where the ball goes, with the challenge primarily lying where everyone comes together, on the greens. Alistair McKenzie knew what he was doing. Every course should have children’s tees and holes cut much bigger on the other side of the green for them to putt to. Professional golf has never been better. The players are doing a great job marketing themselves, and the round-the-clock coverage allows us to cover every story and every player, which brings more interest. With the Olympics on the horizon, golf will grow as it never has before, at least globally. Here at home, it needs help.