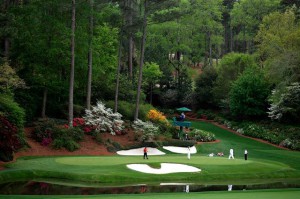 Which is the best of the four majors? Your answer could depend on where you live. Southerners would likely choose Chick Fil A for the favorite fast food, Jimmy Carter as their favorite President (ummm, no) and The Masters as their favorite major. Europeans will say The Open Championship. And no, it is not the British Open. It is The Open championship, as if there were no other opens worth mentioning. They have a point. Australia and the United State weren’t even fetal back when the Brits were cutting off their monarch’s heads and burning heretics at the stake.

Outside of the South you’ll find a lot of support for the US Open. I don’t think any geographic area claims the PGA. But it’s likely geography doesn’t influence your decision. Your favorite major is probably more influenced by what you see on TV and your memory of the great moments that have happened in each major.

In this four part post I am going to go over what’s great and what’s tiresome about each major. At the end, in August, I will reveal my rankings. Save the date!

The anticipation factor is very high for the first major of the year. Scheduled for the first part of April every year, golf geeks have to wait nearly 8 months, from the PGA in August, to see another major. Several weeks before the tournament the media begins to hype the various Storylines of the Year: Which young gun can break through to the next level? Which aging/oft injured player can regain his form? Who are the favorites? Which previously-unknown-but-has-a-heartwarming-life-event player can contend for three rounds and then fall apart on the back nine on Sunday?

The Masters also has the familiarity factor. Every golf fan knows Augusta National and they look forward to seeing players attempt shots on holes where they have seen countless other greats execute similar shots through the years. The most memorable: the tee shot on 12 where the wind, apparently, blows like the inside of a convection oven. I heard one announcer say that you have to look at the flag on 11 and then gauge the wind with your left cheek…umm, okay. The approach shots on 13 and 15 are also among the most famous in golf. Gene Sarazen’s double eagle on the 15th in 1935 was called the Shot Heard Round the World until 1951 when Bobby Thompson’s home run for the Giants became the more famous Shot Heard Round the World. Tiger Woods “Chip on the Lip” on the 16th hole is arguably the most iconic shot in golf history.[1]

The tournament also broadcasts so perfectly. The colors pop in HD. Then comes the tinkling theme music[2], the bird chirps, and Jim Nance intones, “Welcome, friends,” and a whole country of golf fans are aroused.

The other thing about the broadcast is the utter lack of commercials. They even went commercial free in 2003-4 while they were in the midst of the Martha-Burke-No-Women-Allowed controversy. [3] Compare that to the NFL where they wring out every commercial dollar they can. They put commercials on before and after every kickoff. They wanted to make Coldplay pay them to perform at the Super Bowl.[4] They told the host city of a Super Bowl they could not use the term Super Bowl when they wanted to promote a tailgate party in the town square. These guys would probably make the Blue Angels pay them for flyovers. Meanwhile, the Masters members seem content to make just an absurd amount of money.

The Masters is also the toughest ticket. On Stubhub right now (mid March 2015) the least expensive ticket is $1167 for the Thursday round. Practice round tickets are going for $490! The Thursday round US Open ticket is $174. The Open Championship still had tickets available on their site for about $120 (I did the currency conversion in my head; if you read my bio you’ll see I’m in Finance). PGA Championship tickets are going for about $90.

You may have to devote a paycheck to see one round at the Masters but once you get there you can get a pimento cheese sandwich for $1.50 and a domestic beer for $3.

By comparison, AT&T Park in San Francisco will hose you for $11 for 16 oz of craft beer and they don’t even sell pimento cheese sandwiches.

What makes the Masters annoying? Well, they don’t let anyone play their course; they didn’t let black people join until 1990 and they didn’t let women join until 2012. Their former chairman was named “Hootie”. Ever since Cracked Rear View[5] I haven’t been a fan of any Hooties. They fired Gary McCord for saying “bikini wax” in reference to how fast the greens were. Great line. That was 1994 and he’s still not back.

That’s more good than bad so we’ll give the Masters a slim first round lead in the Best Major contest.

[1] At the 3:20 mark there are two spectators in the back left, one in pink and one in yellow. When the ball drops, the guy in yellow almost falls down and then, overcome, he just ecstatically rubs his head in his buddy’s belly while hugging him. Awesome.

[2] The music was composed by the third cousin of Kenny Loggins, Dave Loggins. There are actually lyrics.

[4] I’d probably make Coldplay pay me to watch them perform too.

[5] The Hootie and the Blowfish album sold 12 million copies.