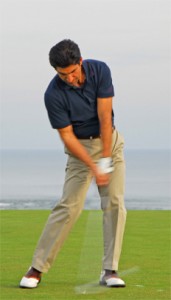 Roberto Borgatti — neither paunchy nor balding — seems capable of working miracles, even with a hapless subject like myself.

Many balding, slightly paunchy 40-somethings like me, fueled by a few beers, a few dropped putts, or a combination of the two, will entertain the notion that come fifty, their game will suddenly come together and they may give it a go on the Senior Tour.

I have not entertained such notions in the past, mostly because I am terrible…though not so terrible that I don’t occasionally break 100.  Thanks to a greatly abbreviated swing, I tend to hit the ball straight, though my distances tend to average those of a man twice my age.  My level of lower mediocrity is a bane, as I’ll often tell myself that I’m not so bad that I can’t make my way around the course without embarrassing myself or my accomplices.  Well, at least not too much.  This has prevented me from seeking the professional help that my game badly needs.

But then came the call from Roberto Borgatti.  “I will be in Seattle on Friday.  Can you come up to play golf?”  I had come to know Roberto through a golf travel book I had written.  He had been described as “pure brilliance, a wonderful teacher with a singular approach to instruction” by my literary agent, James Levine; in fact, Jim represented Roberto for a book on golf instruction.  Thinking that this would be a once in a lifetime opportunity for me to get a thousand dollar a day golf lesson for free, I juggled my schedule and headed north from Portland.

After many phone calls (it’s not easy to find a tee time on short notice on a sunny summer Friday afternoon in Seattle), I found a slot at the Newcastle Golf Club, which offers two 18’s perched on a hilltop that overlooks downtown Seattle, Puget Sound, and on a clear day, the Olympic Mountains.  I reached the course before Roberto, and in hopes of presenting myself honorably, banged a large bucket of balls.  When Roberto arrived, he asked me to hit a more, as he quietly set up his digital video camera.  The images recorded here would later be burned upon my retina in the same way that having a close encounter with a grizzly bear or watching a car crash might be remembered – with a sense of great fear and mild disgust.  Had he showed me the swing that I termed an offshoot of the “Natural Golf” swing – and what he later gently called “Precambrian” – I’m not sure I could’ve continued to the next phase of our lesson.  But he didn’t, and I did.

And I began my rapid ascent to mid-level mediocrity.

Like any great mechanical system, the beauty of the golf swing according to Roberto lay in its simplicity—or at least in the simplicity of the instructions he imparted.  After watching the scary swing for a few minutes, he paused the camera and asked me to stop.  “You’re not getting much of a weight transfer, and you’re lacking rotation.  Let’s do a little ‘General Motion’ exercise.”  Roberto had me stand opposite the tee and put my hands on my hips, then turn my waist and hips to the left, and let my right foot pivot along with the turn.  It felt like I was learning the steps to a new dance, as I followed Roberto’s graceful choreography.  However untraditional the process, my first swing felt startlingly good; despite the dramatic swing intervention, the motion felt quite natural.

Our call to the first tee came, and off we went.  The green on the first hole on the Coal Creek 18, a long downhill par-5 with billions of dollars of Microsoft-fueled real estate spread before us, was reached effortlessly by Roberto in two shots.  I, meanwhile, struggled against regressing to my (un)natural swing, despite Roberto’s repeated remonstrations of “Don’t worry about where the ball goes, just focus on the swing.”  When you’re playing on a much nicer course than you normally play, with a golf pro who you want to impress (or at least not disgust), it’s hard not to return to the familiar.  But I mostly resisted, and some shots went surprisingly well.

“If we lived closer together, we’d work one step at a time and just focus on the turn today, but considering that I may not see you for months, we’ll be on the accelerated program,” Roberto said.  “Next is your hand-set.”  The core of my grossly abbreviated backswing was the utter lack of any wrist cock.  Roberto’s tip for engaging my wrists – the key to generating the club speed that would propel my drive beyond the octogenarian level – was devastatingly simple:  “As you take the club back on your turn, make it move slightly faster than your arms at the end of the turn.”  I’d read and heard far more complex explanations of setting the hands, and tried them all, with zero success.  But this simple sensorial imagery resonated.  I hit one drive that was easily amongst the longest in my life.  And perhaps most heartening, I hit a 4-iron cleanly onto the green of a 180-yard par-3, the kind of long iron shot I could not have dreamt of in the bad old days.

Over a few ales in the hopping Newcastle bar, Roberto quickly downloaded the video footage from our round onto his laptop.  I was glad a drink was handy as he showed the before swing.  “You won’t look like this anymore—unnecessary and harmful stress on the back as your weight/center of gravity doesn’t move properly forward.”   A second ale was soon raised in a toast as Roberto rolled the new me on screen – a motion that actually resembled a golf swing.   I never dreamed such a radical improvement was possible in a day.

And there are still five years to prepare for The Tour!