Before World War II, Eastern martial arts were secret and almost completely unknown in the West. They were either passed down within the temple from master to disciple, or within the confines of a closely-knit family clan. But during the war in the Pacific, American soldiers brought back news of the extraordinary hand-to-hand fighting abilities of Japanese and Korean soldiers they encountered on the battlefield. As America gradually became bogged down in a long, drawn-out wars in Asia the interest in guerrilla tactics increased the United States military began to integrate formerly secret Japanese and Korean martial arts first into Green Beret training then into all branches.

– Karate: The Way of the Empty Hand –

Based on the concept of Yin and Yang, and rooted in Zen meditation, it balances body, mind, and spirit. Codified in 1770 as Shotokan by Master Guchin Funakoshi, this martial art centers on maintaining the correct posture and structural alignment at all times. Karate was so effective in upgrading fighting skills that in 1950 General Curtis LeMay sent U.S. pilots to study it as a top priority.

Master Mas Oyama (1923-1994) — well known for his feats of strength and endurance — is considered the toughest martial artist of all time. His acclaim reached mythic proportions, when, in order to demonstrate the true power and effectiveness of Karate, he fought and killed bulls with his bare hands. Mas, who afterwards was referred to as “The God-Hand”, acknowledged the African origins of Karate and martial arts.

From Karate aspiring golfers can learn punching and kicking skills, and the use of small weapons. Karate’s striking techniques and training methods  — evident in Tiger explosive golf swing and Earl’s approach to training using kata (practicing positions and slow motion movements in front of a mirror) — are easily adapted.

– Tae Kwon Do: The Way of Destroying with Hand and Foot – 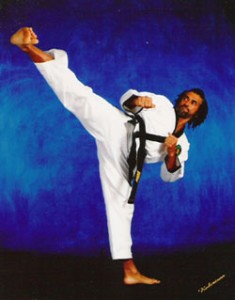 Tae Kwon Do, a form of Korean Karate developed over 20 centuries ago, is characterized by fast, high, spinning kicks. “The Way of Destroying with Hand and Foot” — Tae Kwon Do — is more flowing than Karate, with higher stances and kicks, as foot techniques are more important than to hand strikes. The practice of kata/pomsee forms (shadow boxing) instills proficiency in techniques, and also challenges and develops the mind. Board breaking is more prevalent in training. Tae Kwon Do — which encompasses muscle toning, stretching, flexibility, and increases strength and stamina through aerobic sparring — channels internal and external energy towards constructive uses. 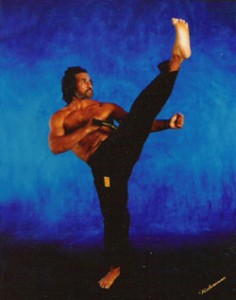 As a result of the Japanese occupation of Korea during World War II many Korean soldiers were sent to Japan for military training. Upon their return they brought back a great deal of Karate knowledge. Various styles emerged. Although they continued to practice Karate after the war and set up schools — each teacher having his own “brand” of Karate — the art began to degenerate without higher instruction from the original source. In 1955, General Choi Hong-hi, in an attempt to better coordinate the martial arts of Korean troops, united the various styles to form Tae Kwon Do. The differences between the contrasting styles were minimized, but the differences from Karate were maximized. The name Tae Kwon Do was adopted from Tae Kyon, the earliest recorded martial arts of Korea (50 B.C.). At first just the army were taught, later the police and air force were included. Nowadays, it is part of Korean schools’ national curriculum. The art is phenomenally popular and is one of the most widely practiced. From Tae Kwon Do aspiring golfers can learn to swing from their center, gain explosive speed and power, and to hone techniques via forms (kata/pomsee) training.

Many golf champions utilize both Karate and Tae Kwon Do to improve power, precision, performance. Both are rightfully considered external martial arts. If you are interested in knowing more and acquiring either of these golf enhancing martial arts please visit www.kpmaa (Pitts Martial Arts Academy) or contact Master Kenny Pitts at pmaa@earthlink.net. In the next article we will explore two other explosive martial arts that improve power and performance,  Escrima from the Philippines, and Muay Thai from Thailand.